﻿Did you always get paid by Mecatecno ?

Yes, yes, but little.
Some great photos from Salva showing the time aged 18 he completed his compulsory service with the Army as a Military Policeman.
More Salva Police photos. Its clear to me that there wasnt much law enforcement going on, here in Barcelona. I'm sure the crime records will show offences reaching record levels at this time :).
You rode for the shop Km.2 also ?

Yes, the first year I ride Mecatecno, I ride for the factory and in the 2nd year with Mecatecno I ride with Km.2 as the main sponsor. Km.2 give me a little money to help me get to the trial for the diesel. The bike was still given to me from Mecatecno . The first one you can see it down here.

Do you have it here ?

I thought you had the real one.
I have made your heart jump ha ha ha

Km.2 sell many many motorcycles

Yes, they sell many.

Do they sell as many motorcycles as Isern ?

Yes. This is an important issue. Isern had a problem, not with Montesa, but when he built the new building, he scolded himself, then I don’t know what happened with DERBI, they had lots of problems and were trapped and went kaput. It was then, when trials took off here and KM2 MOTOS were the biggest sellers in the world.
A street Trial in Mollet. There is no better form of advertising for the sport than this. 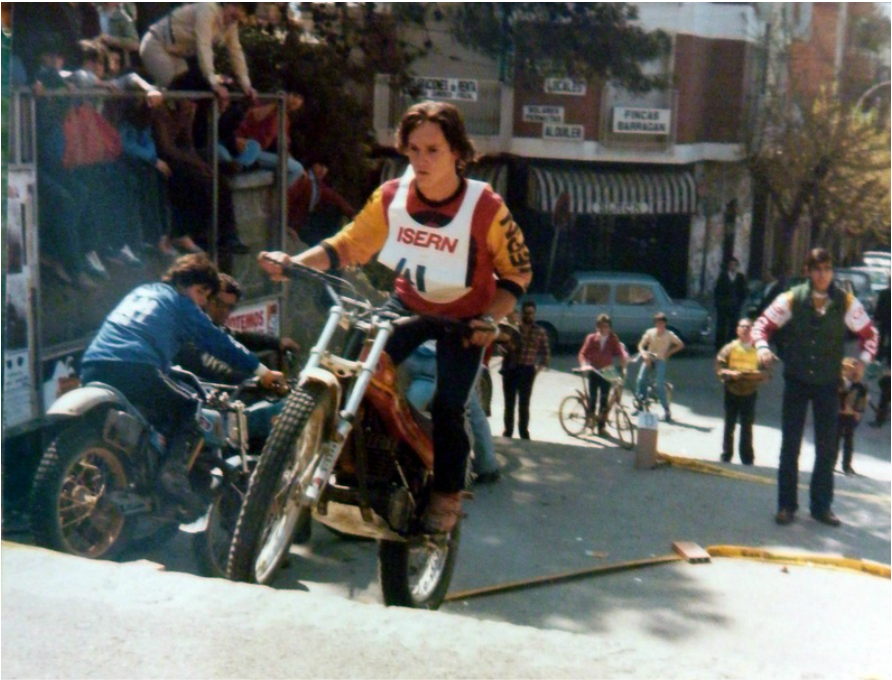 Exclusive interview with Salva Garcia - Minder to Tarres, Colomer and Bilbao www.retrotrials.com
﻿Did you ever help in the Mecatecno factory ?

Have you seen Jordi Rabassa, Joan Ruiz after you leave Mecatecno ?

Did you develop the Mecatecno or not ?

No no no no. I only test what Jordi give me.

You then went to Fantc with Subira. What year was this ?

The 301 - its possibly 1985 or 86. With Mecatecno I think 82 and 1983. I was at the first Indoor Trial at Barcelona in 1982 on the Mecatecno. In 1983 also with Mecatecno and then the next year I was with Fantic.....but no with Fantic factory, I was with Subira, the importer for Spain because Jaime and me are big big friends all of our lives.
Salva rides the 3 days des Cingles trial on board the 1985 Fantic 301
When did you meet Jordi Tarres ?

One time I was at the Spanish Championship trial in Seville at the section 1. I think this was 1985. I look at this youngster and see his potential straight away. This was a difficult section. It was not possible and arrived at this section was this boy Jordi, but I did not know who this boy was. He go wmmm wmmmm brhhhh brmmmmm through the section no problem and I look and wonder, who is this boy ? This was the first time I see him.
Jordi Tarres standing outside of his house in Rellinars. 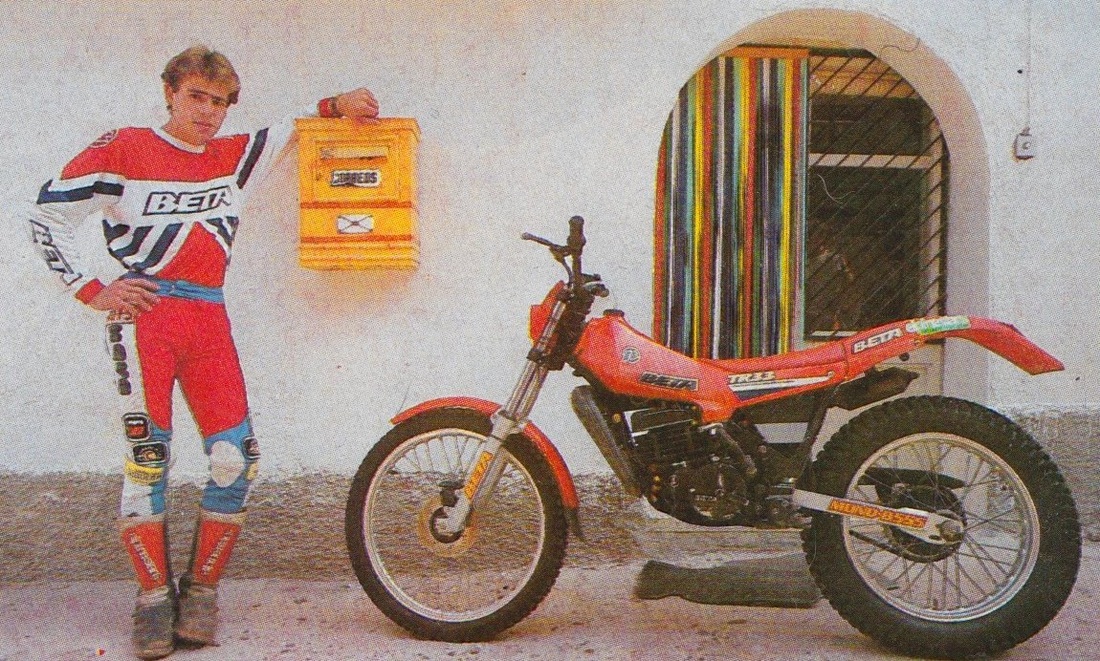 Exclusive interview with Salva Garcia - Minder to Tarres, Colomer and Bilbao www.retrotrials.com
After in another section it was also impossible for any riders to get better than 3 points. He started to go through the section, zero zero zero ...good good good and 1 meter from the end flag .....he go into a hole. The first year in Spain was 1985 when I see him and then I see him the next year in 1986 when he was one of the best. He had rapid progress ..it was incredible, it was much faster than Toni Bou. Toni is an incredible rider but Toni was slow to the top....Jordi was immediate. 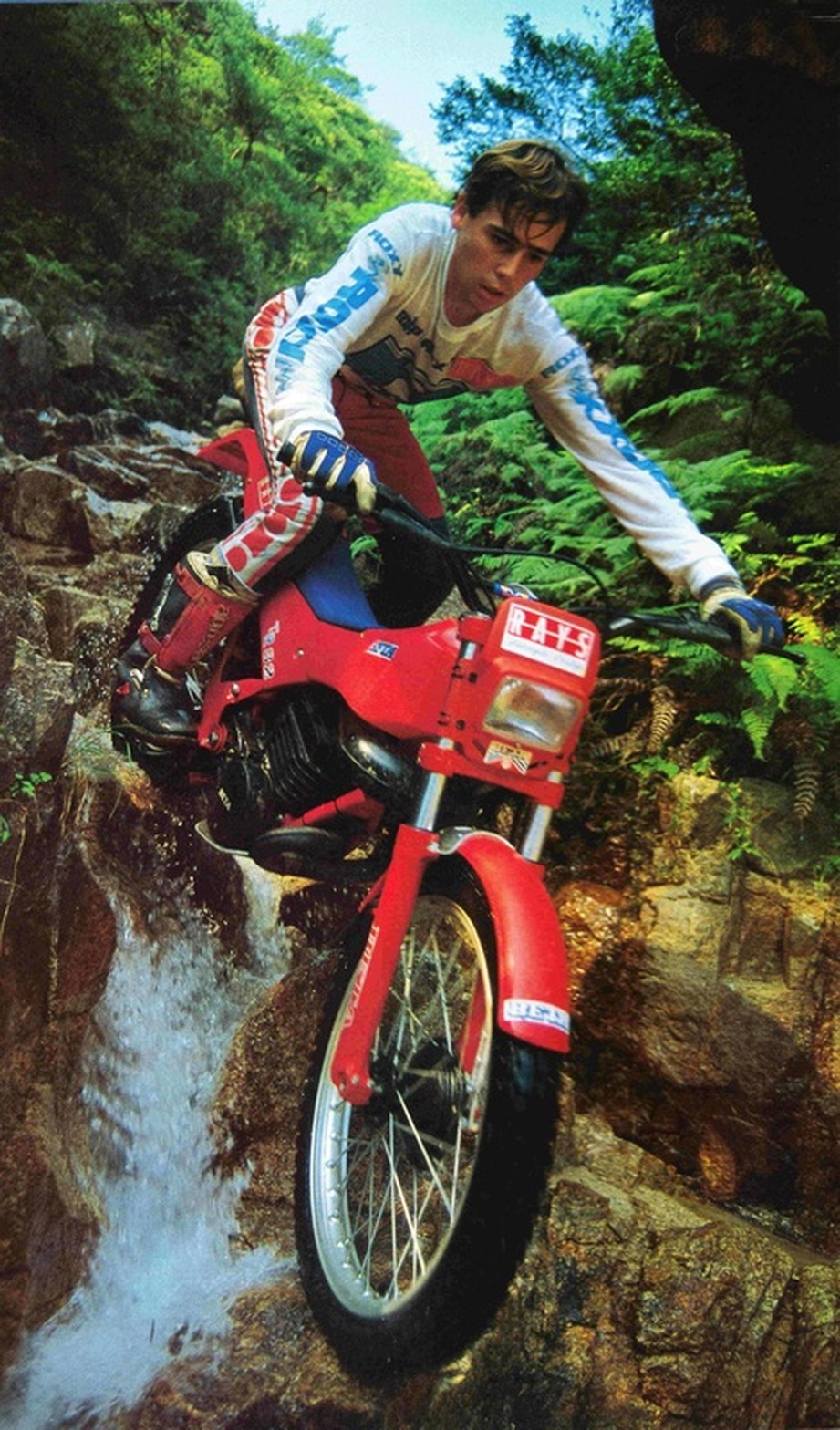