The speed this bike can deliver is incredible. It really really surprised me. It is a very quick bike indeed. I have a GasGas 300 Enduro bike and this JGas 300 is significantly stronger and faster on the bottom and mid range. The transition from the mid to the top end is smooth and NOT snappy. I would say the JGas doesn't rev out quite as high as the GasGas and this encourages you to short shift. The engine sounds very very strong and I revved the hell out of it up those straights, looking for problems. I dragged the bike around at slow speed in 3rd and 4th and the clutch was superb. No slip or drag with consistent lever feel. There weren't any problems. As I'd got the bike hot I had it on tick over and revving it as I leant down listening with my critical ear for anything mechanical and just anything at all. There was nothing. This engine really really impressed me. An electric start will come with his bike with the motor hidden under the engine. It can be removed if required.  The chassis was spot on. It had the correct rake and steer well. The lock was the same as my GasGas.

The biggest pleasant surprise ? The engine and the whole package. This bike is very very good right now. As good as anything ive ridden.

You can see the rain on the lense here. I spent 10 minutes riding around in a huge flat loop digging in a small berm and loosening up the dirt, getting faster and faster. This things grips and grips. I was very impressed. The JGas makes you quicker. Immediately the JGas is competitive.

As you can see, I've had far to much fun and its getting late. That shouldn't read "Ramp" on my trousers, it should say "Damp". I was soaked and I had 10 minutes to get ready. We were off out to a night club !

Well, I suggested that to my wife, Anna and Piber. They thought I was daft as well. Look at my face !. Im begging you - lets go !. I want boogie ha ha 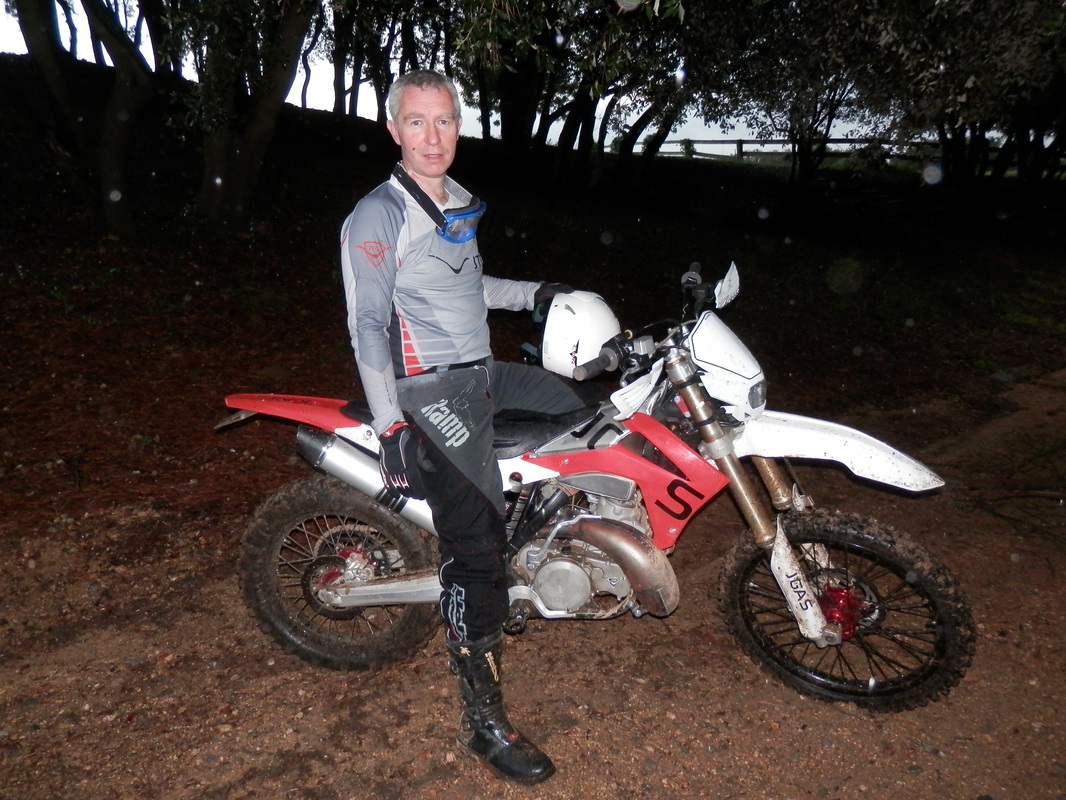 Exclusive Interview with GasGas co Founder Josep Pibernat www.retrotrials.com
Piber is very proud of his time with GasGas
So we all went out for Sushi  which I have no experience of, let alone spelling it. I then realised that I was running out of time and had so much more to do. So .........
Gustavo from Trial shop Gp recambios is now the S3 Spanish distributor?

Yes, Gustavo Putz was the parts manager for GasGas. Kata was the man on the telephone going after the parts to make the motos. He make the acquisitions and Sylvia also. It’s a very difficult work to keep everything here on time.