The main photo shows Jordi Tarres sitting on the 1993 GasGas. Keen Tarres fans will note that this is not the bike that he rode trials on. The bike he is sitting on is the prototype GasGas trials bike that GasGas prepared for Jordi to convince Jordi that they could build the bike that he needed.

This would therefore give him confidence to leave Beta. The prototype worked well and the rest is history. You will note that the bike that Tarres rode in the World Trials had Ducados and Oxbow livery. The bike he is sitting on does not. This photo was therefore taken some months into the new contact. The actual trials bike that Tarres rode in the 1993 Championship(which he won) is in the Barcelona Museum. Tarres only used one bike in 1993 and his other years, not many bikes. He said it was hard enough to get one bike perfect let alone 2 or 3.

The bike in the inset small photo below is the actual bike that Tarres tested with GasGas. It features works lower fork yokes that have never featured on any production GasGas. It also features a modified engine over standard.
Everything costs money 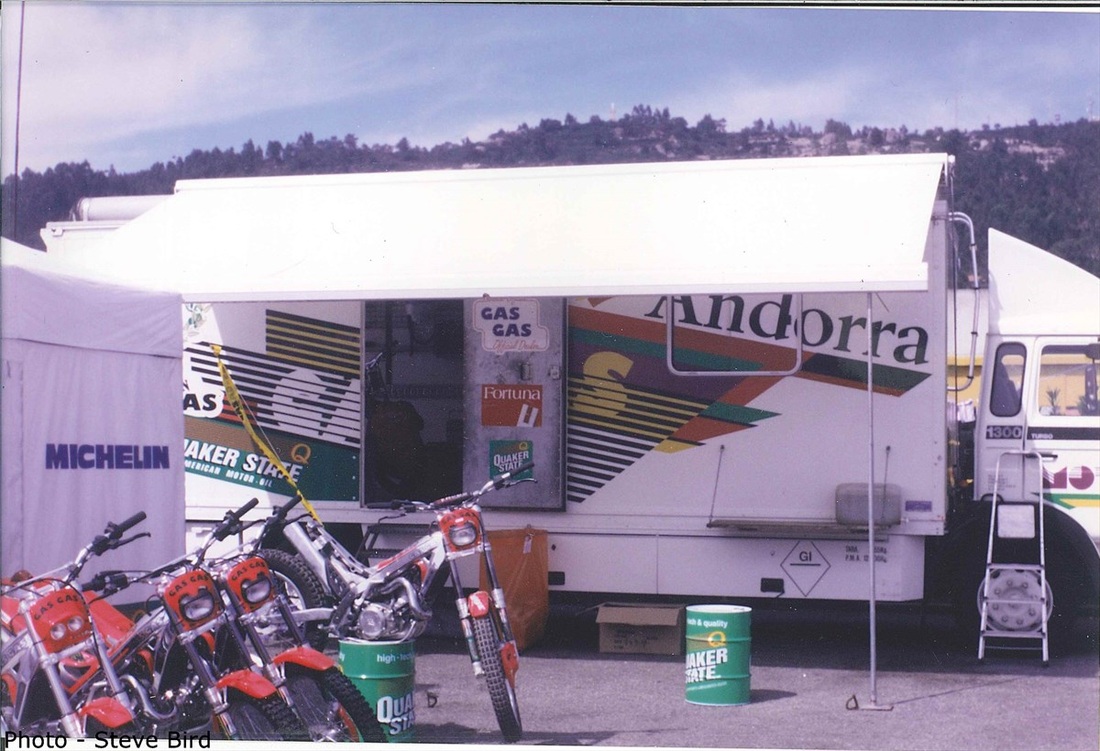 No no, we no make a lot of exhausts, no. Maybe he take one and cut and his mechanic would fit. Every time he have one or two mechanic and this would all be supplied by Gasgas.
Every time they make something this not go in the standard machine. No make nothing for standard machine. I cannot remember the team saying to factory  “We make this, can you use this production?”. No.

What we make for the series on the bike was make by Toni, Mange. I no remember the team coming back to use with nothing
special.

Paul Edmondson was a very successful rider for Gasgas a long long long way away in the UK?
Did he get less attention because he was so far away of this and the language difference?

No, sometimes he is coming here. He would go every day to different place with factory for testing and to run enduro. He come many times here and stay at my house.

Was the trials market bigger for GasGas at this time?

And how many enduro?
Who developed the changes to the Trial bike that would come out the next year ?

The ideas come from us all of the time and sometimes we change immediately, other times things would be for the next year. This year we would make changes to the brakes, bring the stand further in, make the protectors bigger, give the cylinder more power, change the gearboxes and the suspension a little. All this would happen immediately and every day we would be thinking about these things with my team.

In 1992 you would be thinking about the changes you would want to make to the chassis for the next year. Who would make these prototype chassis for you?.

Yes, we would be thinking about this and Chico and Tony who work in the factory with the prototypes with Montje. They only work with the prototypes. After we choose the materials we will use then arrange for the moulds to be made for the different parts, different type of metals to be used, different power than is required. You are thinking this new part is good so you test in moto and its good and its good and then no good and you take out and modify. We run these new parts for one year. After this, in March we finish and say ok we stop test and decide to produce for July or no. After July we start for the next year.