On Friday the 27th of June 2014 the newly renamed JGas launched their refreshed and updated 2015 Trial models to be sold from July 2014 onwards, which includes new models in their line up.

What was an added bonus were the other bikes that JGas also revealed on the day, namely the 2 Enduro models and also the prototype Motoalpinismo.

The launch took place at Jordi Pasquets Trials training centre high up in the hills above Ribera d'Urgellet, Andorra. Jordi has long been involved with Jotagas and is regarded as the company brand ambassador. Jotagas has recently been renamed to the less Spanish and more Worldwide pronounceable name of JGas.

2015 Jgas launch in andorra on 27/6/15 www.retrotrials.com - photo pasquet school
The launch day was an opportunity for the individual importers to get together with the Factory team, brand ambassadors and of course the owner Josep Pibernat.
The team posed together for photographs. On the left is GasGas founder and JGas principal Josep Pibernat. Of course, standing behind the seat of the bike is Jordi Pasquet. On the far right is former Ossa, Merlin and GasGas factory rider Joan Freixas. Standing to his right is Felix Casa Fanio. Sitting at the front in the the father of Pepe Nubiola.

2015 Jgas launch in andorra on 27/6/15 www.retrotrials.com
Statement from JGas


" The design of the JGAS2015 wants to capture the new stage in which the brand is involved so we have introduced a new logo on the bike, which we have been already presenting for some time, as well as a change in the whole design of bike, with an austere, aggressive and highly technological esthetic. The JGAS2015 maintains the same levels of quality and high standards in design and manufacturing as it has done during all this time.
The technical innovations of the motorbikes will be soon presented with its technical specification sheets.
The available JGAS2015 motorbikes will be 125cc, 250cc, 280cc, 300cc and 300cc Racing."
The new JGas Canadian Elka shock, which will be fitted to 2014 models. 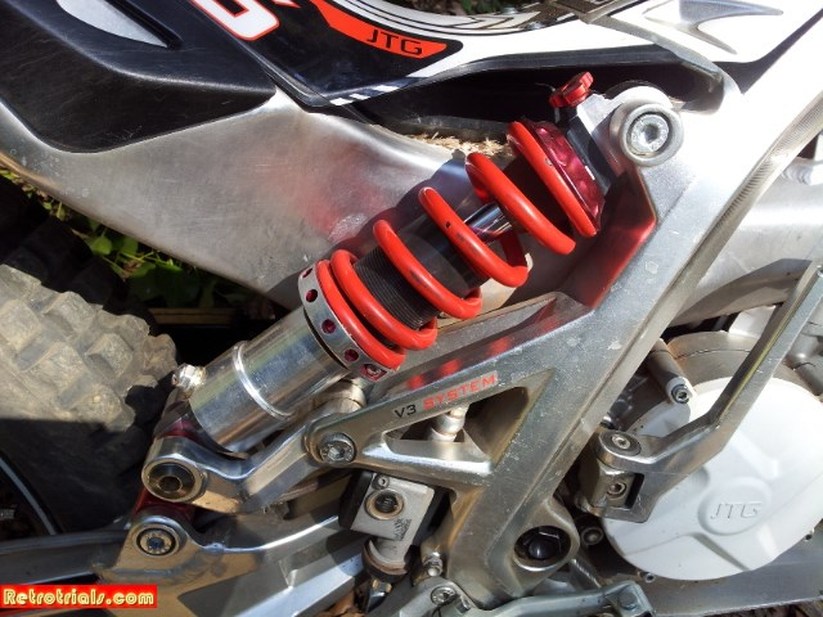 2015 Jgas launch in andorra on 27/6/15 www.retrotrials.com
All of the JGas Trial models were on display.
The photo below to the left shows the new racing 300 model. This will be the first time that JGas has offered a racing model and is following the other manufacturers successful lines in doing so.