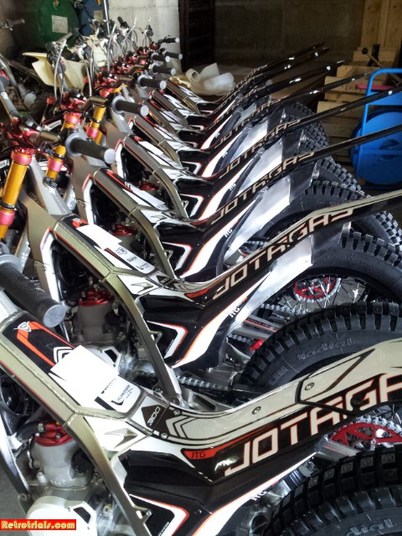 2014 jotagas factory tour WWW.RETROTRIALS.COM
Back in 2012 Retrotrials visited the Jotagas factory in at the Motopark in Alcaniz in the Spanish area of Aragon. Aragon is a remote location about 100 miles west of Barcelona and Girona. It is a long way inland and in an area and can only describe as dusty and desert like. Its in the industrial park , next to the GP circuit. Jotagas was offered financial incentives by the government to locate itself in this area.

The problem was that the whole of the Spanish trials industry is based around Girona. This meant that everyone of the 800 parts needed to assemble a Jotagas Trial had top be transported from Girona to Aragon , or perhaps from Italy to Aragon.
Even if a simple wheel bearing was wanted , they had to travel a long way to get it. That obviously doesn't make too much sense.

Now , in 2014 Jotagas still run the same factory in Aragon , but they only carry out the alloy welding there. All of the assembly has been  transferred to a Girona factory where the bikes are being made today. Now nearly all of the parts suppliers for Jotagas are with 35 miles of the factory.

At the same time in 2013 as bike designer and Trials God Jordi Tarres left the company , Jotagas underwent a downsize to a smaller team. The boss Josep Pibernat considers this new size sustainable and manageable ensuring the longevity of the company.

For those who don't know , Josep Pibernat is and always has been heavily involved in the motorcycle industry.He is a Spanish Enduro champion and has also competed in the Dakar rally a number of times as well as other awe inspiring motorcycle rallys around the World. he also has several ISDE gold medals. Josep , or Piber to his friends is best known as the joint founder of GasGas.  He started building motorcycles in 1985 and grew the company to the largest manufacturer of motorcycles in Spain and the largest manufacturer of Trials bikes in the World .Every year was growth.Piber was head of operations.   As the company got to its biggest size ever the company was sold to a holding company with Piber remaining with a minority holding.The massive company shake ups within GasGas during 2006 is widely known to have swept out nearly all of the existing staff to be replaced with new University graduates. This was when Piber left. This clearly makes Piber a very experienced motorcycle industrialist and businessman. There can be no question about it.
Firstly , i want to let you know something. I have had two Jotagas's . I have had a 2013 JTG 300 and now own a JTG 300 2014. I have had to pay for these with my own hard earned money. I didnt receive any discount. I dont get anything from Jotagas or Steve Saunders to talk about Jotagas. The most ive ever got out of Jotagas is coffee and tea.I paid for my flights ...i paid for everything , so this is an independent report. If it's good ill tell you about it. If it's bad ill tell you about it :).
I write about Jotagas on my blog and on this web page because i love the bike. In fact i think its the best bike out there. I also love the brand and i like riding something a bit different.

I am an independent hobby writer. Unlike magazines and papers, I am not beholden to advertisers or sponsors or anyone. I should be so lucky ha ha .  In fact I like this position and don't want advertisers. Id let advertisers on here , but it would be for free.
This makes the reports on Retrotrials.com believable .

I contacted Josep Pibernat at Jotagas and asked him if i could come and see the new Girona factory. I wanted to see how things were going , see the fabrication ,speak to the boss and get a good feeling on the direction of the company. I also wanted to interview Piber about his days prior to Jotagas when he was the head honcho at GasGas. Retrotrials.com is already heavily immersed in the GasGas story but it would ﻿not﻿ be complete without speaking to one of the two joint founders. I very soon got an email back from Piber saying yes , he would love to meet me (that was nice). He had heard all about me and this website and he said these were all good things ( this is going well ) ha ha .

Over the next couple of weeks we organised the date of my visit to see him and Jotagas. He insisted that i stay at his house on the edge of Girona which i had already been told was so so so impressive. Piber also insisted that he collect me from the airport. The poor guy thought i was flying into Girona but i had to fly to Barcelona instead , so it meant a longer trip for him. Thank you to Piber.

So , in March i flew out alone to meet Josep Pibernat and visit the Jotagas factory. For me , this is a big deal. I had wanted to meet him for a long long time.Id been following in his footsteps for years tracking down the history of the firm.


In order to really know about GasGas i felt i had to speak with the BOSS. It makes sense i think. This was a great opportunity.
The interview with Piber that will come soon is incredible and not the story we've become accustomed to hearing

Anyway ... i landed in Barcelona terminal 2 with Ryanair and walked out of arrivals into the main hall expecting to see Piber waiting for me .......but no. Then , my phone rang and his name appeared on the screen but i could answer it in time as my hands with full of baggage and Mecatecno mudguards for friends in Spain. Then he was gone. I was scanning the faces in the busy hall ,comparing them all with then last picture i had seen of Piber , in his Gasgas days, say back in 2005 or 6. Then as i looked around towards the doors , Josep Pibernat appeared out of the revolving doors . I waved to him and we met with a warm hand shake and greeting. Piber is a short , well built strong man , with a strong face and a chest that he holds out , like your mother always told you to do. He had presence and had standing.He spoke good English although he modestly denies this.


I then followed him out to his Mercedes Vito people carrier. The side door opened and silently opened on an electronic motor. Inside the rear was a huge industrial MIG welder. I placed my case inside along with the 3 Mecatecno mudguards that i had already promised to two friends about a year ago. I then sat in the front and buckled up.
Piber is known in the industry for being a fast driver. I joked to him that i had hoped to be collected in the Lancia Intergrale . He replied sternly that he had three of them. I thought "Ooops" . We then set out on our journey to Girona and Piber's house . I had no idea where this was. I only knew that it was in Girona somewhere. The conversation between us then immediately became very very easy and he was a good guy to talk to. We had so much in common. Ok , im not an industrialist and haven't been involved in running multi million pound companies ha ha , but  believe me , we had lots to talk about. Bikes , bikes ......and bikes ha ha . GasGas , Jotagas and more bikes.

He drove us for what seemed like 45 minutes, stopping occasionally at Tolls to pay our way. We then turned off the main motorway and the size of the roads got increasingly smaller untill i found myself going up a steep hill , bordered by Grand Grand houses on either side. After a few more twists and turns we pulled up outside some huge 10 foot tall gates flanked by ever so tall strong stone walls. The gates slid open and we drove up the steep drive way . The driveway twisted and turned and we eventually parked in a very generously sized area for vehicles. Behind us was a huge waterfall , perhaps 60 feet wide by 15 feet. In front of us was Piber's house . This is an immense twin story  property taking up such a huge footprint. The open front porch was 40 feet by 10 feet in depth. Under the porch were perhaps 5 scooters and a GasGas enduro bike strapped down to a trailer.

It was dark and getting late. My plane had landed at 8 and it was now 9. Piber's wife Anna came to the door and she was very welcoming. We went inside the huge hallway with solid wood staircase to the first floor . The floors were all marbled and everything was of the best quality.
I was then led down a long corridor to my bedroom suite.
Very nice . The view over Girona was amazing. You could actually look down and see nearly all of the city.


Most houses in Spain have shutters on the windows . Im sure you will have seen these. Spaniards do take security very seriously although personally ive never had a problem there at all.


Piber's house had a twist on this. He built this house 20 years ago and when he was making it he designed in rising solid steel shutters that come out of slots on the ground immediately outside of the windows. The metal was lined on both sides with wood so that it looked better. It was all controlled by buttons in the room. It reminded me of the Jodie Foster film - Panic Room.


The shutters came up blocking out the windows entirely and encapsulating you in !!!!. It was quite a weird feeling.
After a shower it was back to dinner with Piber and his wife at the dinner table. Some soft pork cutlets i remember were very nice and the red wine also. Then after dinner we chatted untill 2am. We spoke about so much . Piber was very open and did most of the talking. Time for bed , i was shattered.

The next morning it was time for breakfast with a tall strong Spanish coffee and cakes. Piber was very smartly dressed in a blue chequered collared shirt and trousers. This morning i could see in his eyes, his business head was on. Conversation was shorter and i could see he had things to do. After a late breakfast we travelled the short distance to the Jotagas factory.

When we arrived at the factory we entered through huge sliding doors , which were already opening. The light was already strong and was streaming into the very long and wide open plan room. The noise of the factory greeted us. The factory is located near to some woods with steep hills and banks. This is a perfect location for testing , it really is. Some of the hills are awesome and way beyond my capability.

The new bikes however are never taken off the driveway for the test ride , so to keep them brand spanking new.

The factory is divided into four different clear sections .

What struck me as i entered the factory for the first time , was that this was just exactly what i had expected . The factory was neatly segmented into different departments and areas. It was also perfect compact size for assembling Jotagas. The open plan factory was predominantly one large long room which is about 200 feet in length and and about 50 feet in width.

It just all made sense. Piber gave a me a tour of the different areas and introduced me to everyone else . He showed me around the factory for about 15 minutes and showed me some really interesting things , which i will come to in this report. Then after about half an hour Piber wondered off . Right  , now i can have a good look around and a good chat with the guys here.
﻿Lets have a look around﻿