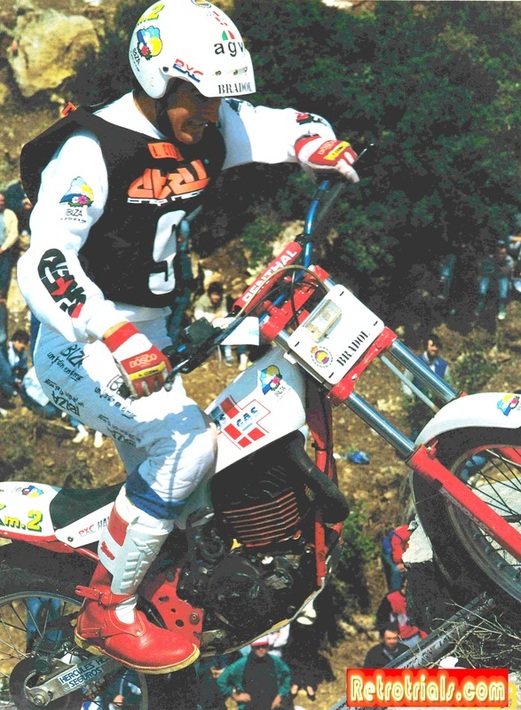 Andreu Codina needs no introduction to fans of Trialsin (cycle trials) and motorcycle Trials. Andreu is one of the very rock foundations that the sport is built upon. He was an avant garde and experimental pioneer within this newly formed and developing Trialsin sport travelling , at an young age   with Pedro Pi and others in European and World tours. Wait untill you hear the age he was given his first full time professional riding contract  :).

After much success in Trialsin Andreu discovered the opportunity he had been looking for and moved into motorcycle trials as a professional rider. His happy and outgoing personality ,determination and eye for an opportunity saw Andreu become a successful Professional motorcycle trials rider for many years whilst at the same time developing his business acumen importing motorcycle products into Spain.

Andreu grew up in these sports  with local friends including Jordi Tarres, Lluis Gallach , Gabino Renales and Toni Gorgot. Where one of these guys were , the others weren't far behind. They all practised , competed , travelled and relaxed together forming strong friendships and the became the Spanish equivalent of the Trials Brat pack as they're adventures carried them around the World.

Andreu's real strength came in his business acumen and this was rewarded as he became GasGas Worldwide sales manager in the huge heady days of growth , huge sales and company expansion and prosperity. Andreu created the Worldwide dealer network. All this whilst still running his own same wholesale motorcycle and cycle parts company .

Andreu later left GasGas and was partner is starting Sherco with Marc Tessier.

Andreu Codina for me is one of the King pins of modern Spanish Trials. He was there , right in the middle and in the thick of all the action and the best times in 80's and 90's Spanish and World Trials. He's a first hand witness to everything that i love about Spanish trials. His knowledge of the industry is massive.
I cant think of one person who has had more success both as a rider and a businessman , than Andreu Codina.

His friends and contacts in the industry  are extensive. If i had any questions about trials .....now was the time to ask it.


This guy is much much more than a Trials rider.
Andreu's interview reveals a story that is inspirational  and also very very interesting giving a great insight into the early days of Trialsin , the Montesa competition department , special mods , his days on the road with Jordi Tarres , the early days of GasGas and even helping families behind the iron curtain.

As always, i am typing this interview out word perfect for you as if Andreu is sitting next to you.

You should read this interview with a Spanish Accent in your head :)

The interview will be interspersed with hundreds of photos from Andreu's collection that you will never have seen before. He keeps them very well organised in chronological year photo albums. That said , although i will try ,the photos may not always correspond to the story being told. There are so many photos that after the interview i have made some pages of photos under the headings "Travelling" , "Group photos" "Modes of transport" and "Fun" :)  .


I have been a fan of Andreu and Gabino Renalles for several years , to such an extend that i drove down to Spain to buy 3 GasGas Halley's. They are the first bike that GasGas ever made and started in 1986 running through to 1987. One of the bikes i have is a very early 1986 bike which was in a production run of only 30 in that year. Andreu has always been in the "in crowd" of the Spanish and Catalunia trials World . He was always in the photos having a good time and seemed to me to have some quality that made people want to be around him. Although Andreu was a superb rider , the results at the top of the sport never came to him fully with 11th being his best position . This made me wonder even more why Andreu had had such a long relationship as a rider with GasGas. It seemed a little extraordinary that he was a Gasgas rider for so long and was with Gasgas for so long.Was i missing something ....well it transpires - Yes i was  :) . Andreu also seemed to be the "Golden Boy" of GasGas. If you ever saw a picture of Narcis Casas or Josep Pibernat the founders of GasGas, Andreu would be standing next to them. I was left wondering ....why ? You appear to have a lot of influence ....why ?. I really wanted these questions answering . I also knew that Andreu would give me a different story on the trials scene from his perspective , perhaps shedding a little more light on the top riders.I also wanted to know about his Trialsin days....... I could go on .....there was so much i wanted to know :)  .


I first got in contact with Andreu in June or July 2013. He had already seen this site and also the Facebook page where he had put us all to shame answering questions that no one else could :)
Andreu kindly agreed to an interview at his home , to enable me to take photos of the items of memorabilia that he has along with his bikes. 2 weeks before the interview Andreu sent me a Garmin GPS program . Unfortunately i dont have a Garmin Satellite navigation so i had to pick away at the program to find the GPS codes within. Once i had them i inputted the Longitude and latitude in to Google and found that Andreu's house was in a very rural location. I then located the position into my Sat nav and prepared my questions , of which there were many.


Arriving in Spain we head towards Andreu's house in the hills about Barcelona. Because Andreu lives on a track and not a road it was very difficult  to find our way there. The Sat nav would take us down the nearest track and we would travel through farm yards , parts , polythene farmers tunnels , through small streams and along bumpy tracks for what must have been 4 miles. Then the track would stop and get so bad it was impassable. We would then turn back to the road and look out for any track turnings on the left , as we knew Andreu's place was in that direction and we were on the nearest road.