from different eras. a few words from paco's riders

When were you born ?

How did you first get involved with motorcycles ?

I start in the factory of the shoes when I am 13 years, in Barcelona. I was born in this place, Barcelona and only a few years ago I leave Barcelona for the first time and come to Tarragona to be near my daughter and her children and baby sit. You understand? They come and eat here. It’s changes my life now.

I start in the factory of the shoes and I work from 6 to 2 pm and then I go to my house to eat and then I start again in the shop of bicycles in the afternoon. Also we repair in this shop very old motorcycles to repair them. The peoples comes to us with problems with their bicycles and they come to us and I repair the bicycle. I also repair small motorcycles at this time. The bicycles were for the people who live and are in Barcelona at this time were residents. At this time there were no tourists and for economic reasons they ride the cycle. My father at the time was very good friends with Antonio Somorano who was the president of the Catalan Olympic games. Mr Somorano was the boss and my father was the worker. Mr Somorano was also friends with a very wealthy business man from the textile industry who invested money in the Montesa company, back in its early days . My father talk to the investor and say “my son works with motorcycles and repairs them”. This friend then talks with Mr Leapoldo Mila who was also one of the investors in Montesa and they find a job for me. They agree to give a job to me and I start with Montesa at 17 years old. The year was 1958 when I start.

Which factory did you start at ? 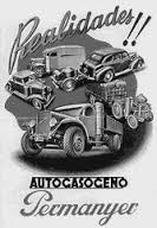 Interview Montesa trial mechanic Paco Mateo www.retrotrials.com
Due to the 2 wars in Europe, the Spanish Civil War (1936-1939) and the Second World War (1939-1945) fuel shortages in Spain were cronic. Montesa initially started production of Gas generators from their Calle de Corcega  based factory in Barcelona. These generators fed the spent exhaust gases (still rich with petrol) back into the engines of cars and motorcycles, yet again to be burnt again. This helped greatly with vehicle economy and were very popular. However by 1944, Pere Permanyer, Montesa's sole owner realised that the end of the war was not far away and that fuel would be in plentiful supply, rendering his emergency resource gas generators useless. There was also a huge demand for small capacity motorcycles for the domestic market, coupled with no domestic supply. At this time Pere formed a business relationship with his friend Josep Antoni Soler brother in  law Francisco Xavier Bulto. Pere knew nothing of motorcycles and so capiltalised in Bulto's love of the machines as well as his knowledge of sport. 1920 motorcycles were produced at Calle de Corcega under the managerial eye of Bulto who had formed a partnership with Pere but with a smaller 11% of the share holding. It was during this time that Montesa's production and motorcycle racing heritage really took off. It was during this period that Montesa started to flourish, becoming Spains first true motorcycle manufacturer with a working production line that started on the 19th of June 1945. Pere Permanyer bought the first motorcycle off the production line.
1943 -  Calle de Corcega 1st Montesa  factory                                  2015 - The same site however the building has been replaced
﻿Due to the additional expansion that was required and the lack of space available to Calle de Corcega, efforts started to move Montesa to the larger premises on Calle de Pamplona, Barcelona, where they operated from 1950 until 1962. The companies offices at this time were located at a different place, namely 13 Calle Ausias March. It was in the Pamplona premises that Montesa really started to shine, producing here models such as the sporty Brio and Impalla models. This was also the time when Montesa's name travelled the World being the first Spanish motorcycle company to get recognition outside of the borders. Montesa now started to fly.
Jim Bound was the Uk's first Montesa importer . He is pictured on the right in the late 1950's at the Calle Ausia March Montesa offices, with friend Les Griffiths . The 2nd photo shows the exact same location today.
​1951   Montesa Pamplona factory                                                              2012 and now manufacturing sewing machines
Retrotrials.com visited the Pamplona factory in 2012 and took a bundle of photos. At the end of this interview I will place a link to the report.

The first day I start at this factory Pampola I was only 17 years . My job was to repair the pieces that were broken. I speak with the special chief of the factory who assist the personal and I tell him I no like this job and I want to work with the motorcycle.

What were you repairing ?

I was repairing the machine and the tooling in the factory that were broken. Maybe something was broken or not working. It was my job to mend these things. I speak with this man to change my job because I no like this work and the next day I start in the department of the prototypes and the race department and test the engines to work good and also for the more horsepower.We also adjust the horsepower to make it more one way or more like another depending on the race. I also go to the race to test the bikes. We test the bikes on the road and in the factory and at the races. I remember at the factory when I was working on the Cappra motorcross bikes that were very tall. We test these on the road and I have to place the bags of  wood on the road in  many places so that when I stop I have something to put my foot on, because I am quite small in height ha ha ha. At this time there were no many cars so this no matter. We made motorcycles for the military at this location and these were also very high , so also a big problem for me.
Page 3﻿