I met Yrjo behind the smoked glass front door in the small reception of Apico's HQ in Burnley. In fact I think I had arrived there just a few minutes before him, but this was me driving fast and getting there early, rather than anything else. I was looking into the glass display cupboards in the reception when Yrjo walked in and we met for the first time. It was great to meet the man who I read about and whom I had heard about from other top riders, in such admiring ways. 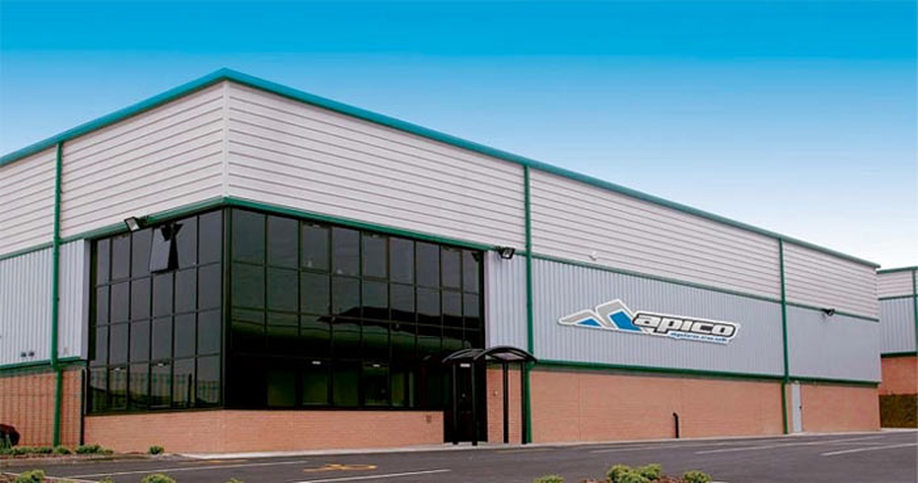 Photo Apico ​A detailed career interview with 3 x World motorcycle Trials Champion Yrjö Vesterinen
After a warm welcome, Vesty invited me through the double doors into the huge warehouse room. Although the room was so large it didn't feel so big, because it was so full of Trials and off road products. Everything was organised very neatly on metal storage racks which lined the room from front to rear. Each walk way was clear, exaggerating the height of the racks. It was only when you looked up at the inside of the metal roof that you could appreciate the size of the room. Several men and women workers walked briskly up and down the isles listening to the Ken Bruce radio show playing in the back ground. This was such an incredible Aladdin's cave of items I cannot explain. The effort that has clearly gone into designing so many of the products and sourcing the rest is just astounding.

Just for a moment I imagined getting a 60 second dash around the warehouse in a true Supermarket sweep fashion, hosted by Vesty. Silly I know ......

What would I dash for ? I need a better set of footrests on a Merlin because at the moment they hurt my feet. I'm always hunched over on one of my GasGas, so some red high bars would help ..... Some of my air filters are a little crusty ....hmmmm.

It only lasted for a split second and I was back to reality.
Yrjo explained to me that he had sold the Apico business to some of his employees and that they were continuing the business as usual in the same manner as they had always.

Despite selling the business, as I followed Vesty down one of the isles we entered an area still clearly dominated by his stuff. It was breathtaking and you'll get to see this.
But enough of this editorial. Let's hear from the man himself. This interview is typed up word for word as it was spoken. ​Please note that the interview will be shown in black and any editorial will be shown in blue. Yrjo introduced me to his collection and this is all typed up here for you to read. Later, we come to the interview.

​There are a lot of things to show you, so maybe you should grab some biscuits and coffee.
﻿Meet Yrjö Vesterinen
Firstly we will have a look around his collection with some details from Vesty. 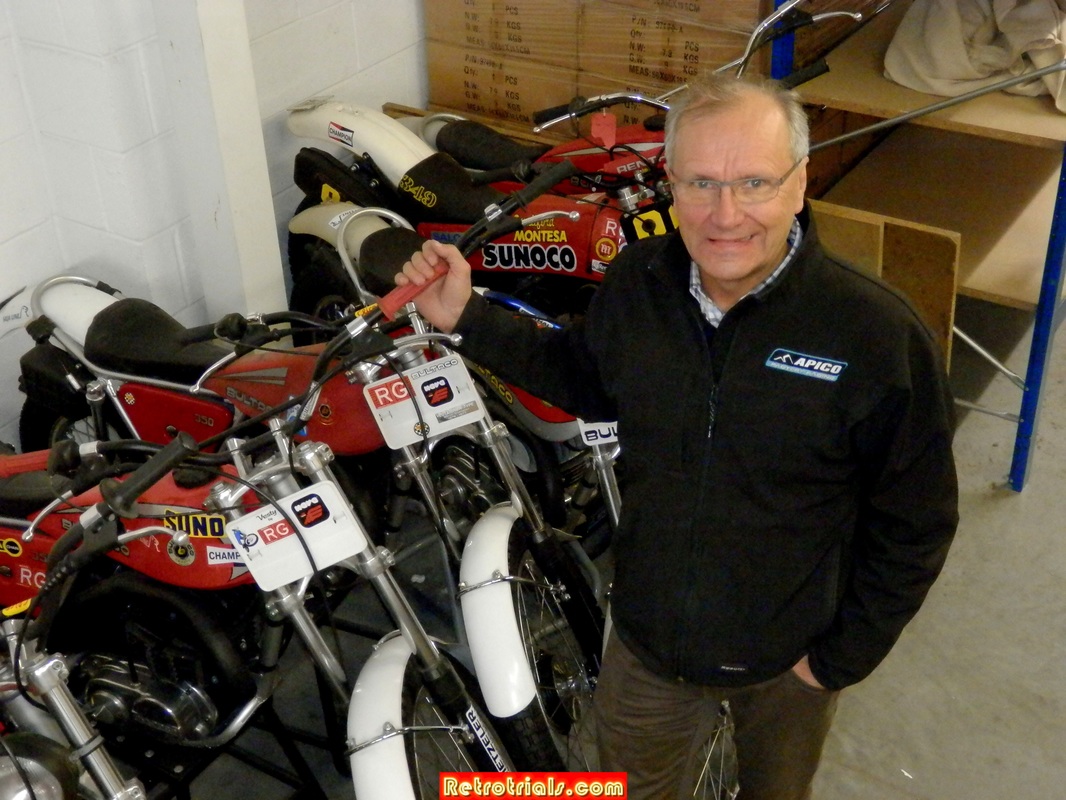 A detailed career interview with 3 x World motorcycle Trials Champion Yrjö Vesterinen.
I have these petrol tanks here because already in the 1980s they were bubbling so we kept changing the tanks and we ended up with two tanks for each bike. These tanks here are from 1980 to 1983.

The first red Bultaco tank is from an Alpina. This is a larger tank than the original Sherpa tank. I only ever used this tank once and this was in the 1970's when I rode a trial in Finland which is called the "Special trial". It is similar to the Scott trial. I rode this trial in 1977 and wanted to have enough fuel for the entire trial so I didn't have to spend time refueling. I had an Alpina seat also fitted to the bike at the same time. 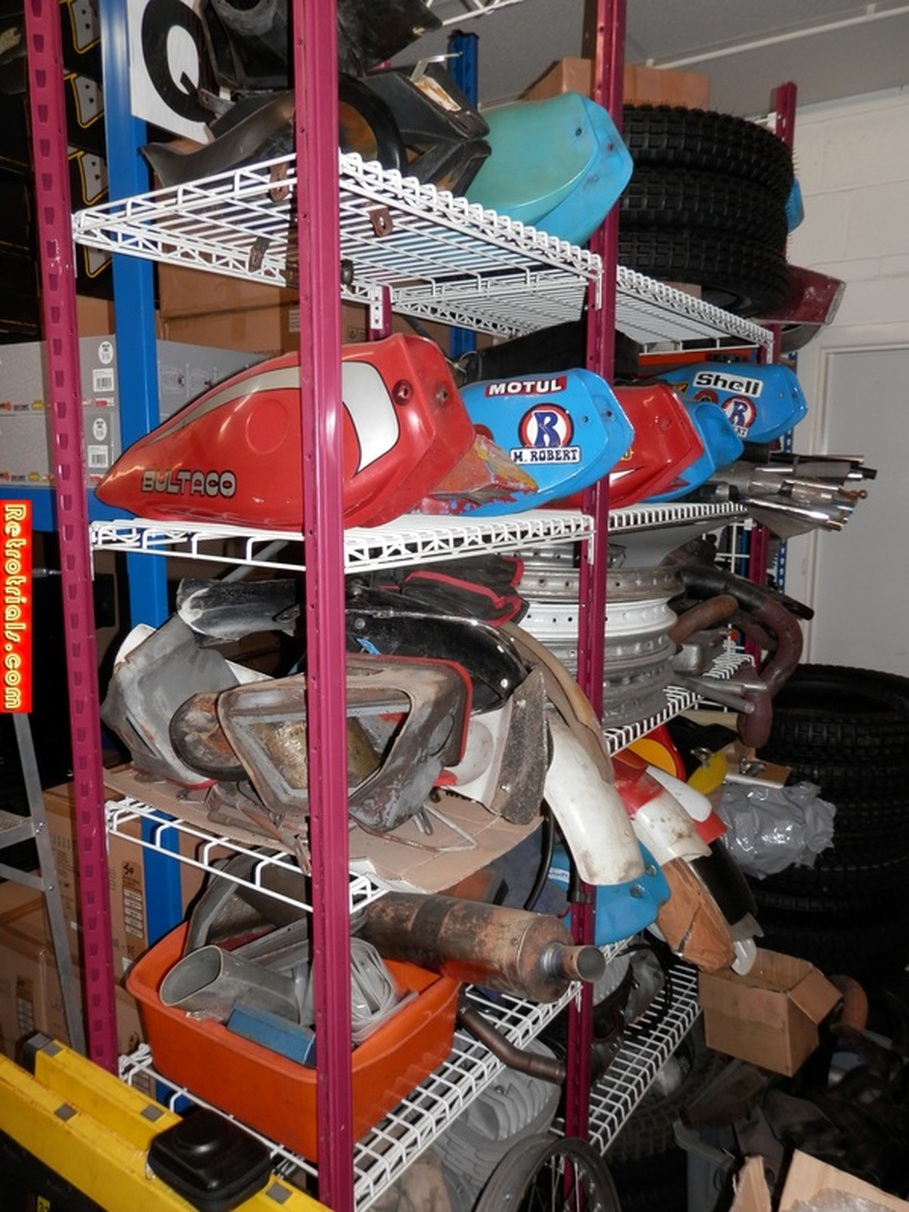 A detailed career interview with 3 x World motorcycle Trials Champion Yrjö Vesterinen.
You can tell by the stickers they are not presentable. They are not good for a factory bike. This is a tank they barely used in America, it has the original Comerfords sticker.

You can see the tank with the Motul sticker. This original tank belongs to my original 1982 British championship winning bike. 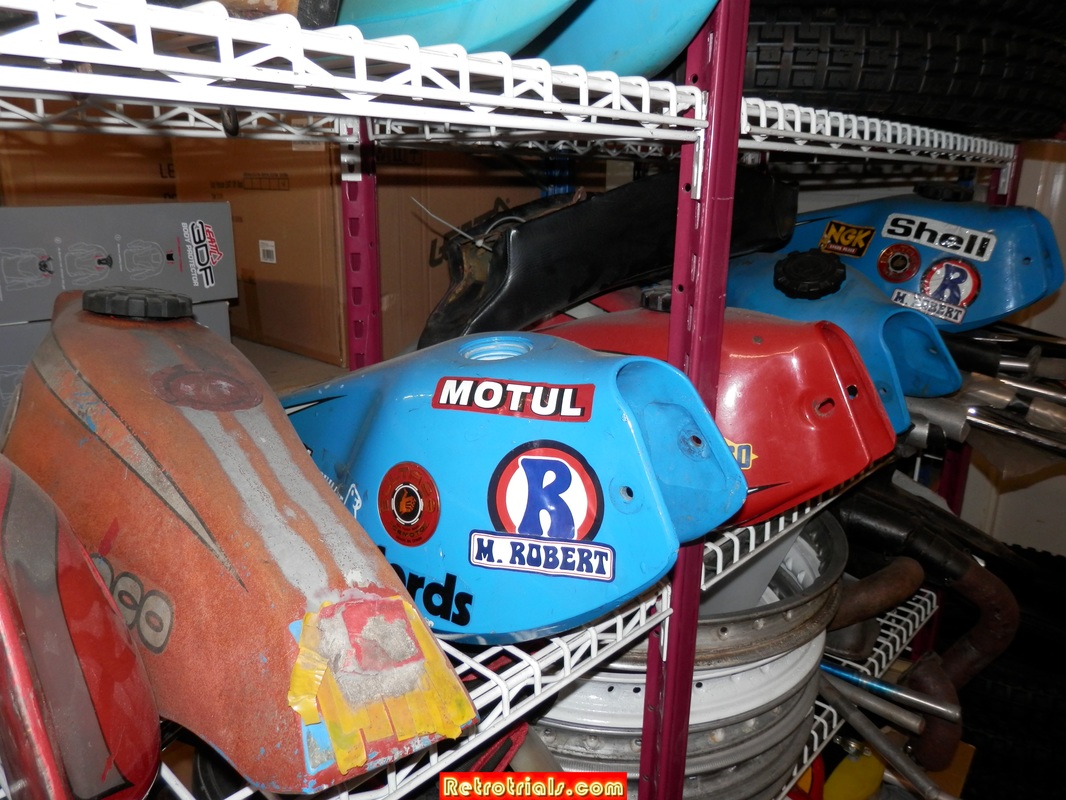