​​A detailed interview with Oriol Puig Bulto + full access to his photo gallery and Trial records.
This is my office . There is a nice view from here and it is a nice place to work

Marta says - I will show you the gift from Pedro Pi . When Oriol retired pedo gave him a gift which was very nice. When they were racing these 2 were absolute rivals.Oriol - This award was the idea of Pere Permanyer and was given to myself by upon my retirement. 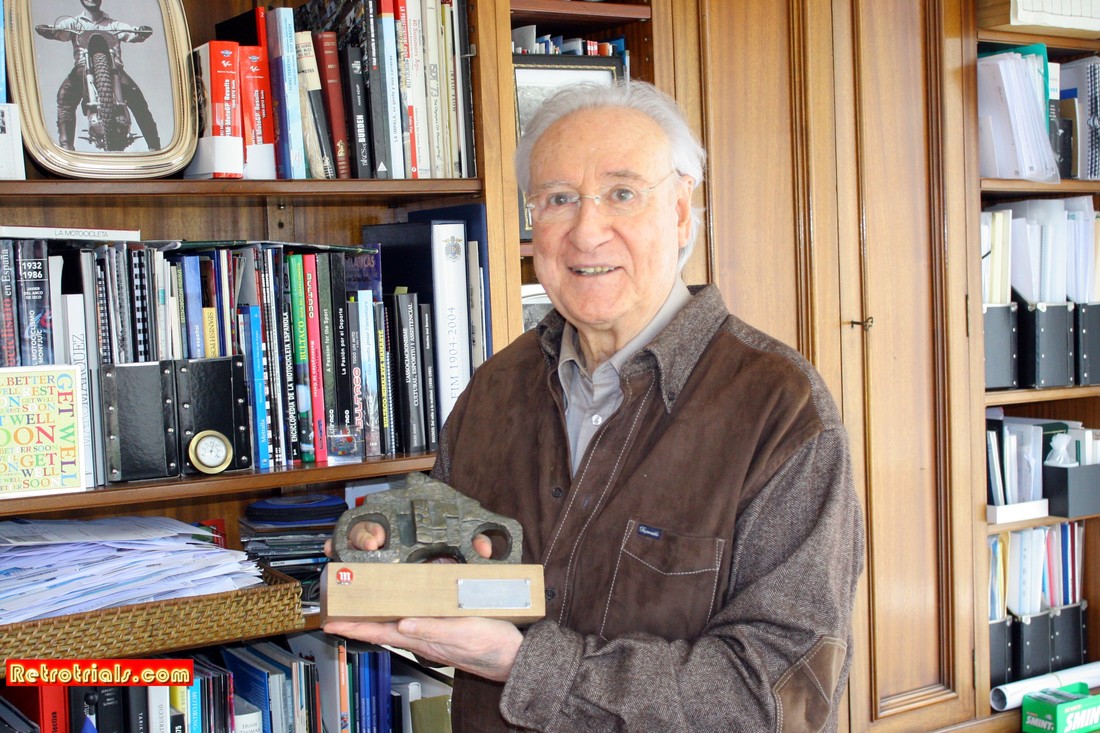 ​​A detailed interview with Oriol Puig Bulto www.retrotrials.com
I have visited the location of the 1st Tralla 101 today . It is in the Switzerland transport museum.  But this one  was used and registered to Jose Mª Llobet (nickname=Turuta). The man who won the first 24-hour Monjuic was Juan Soler and i have the Tralla number 6.  It's a pity i sold it.  I also  owned a Metralla 200, then i sold it when i bought the Metralla MK2 . but the Bultaco number 1 is in this museum . I visited it with the Swiss  importer for Bultaco Orlando Calonder who bought it from the Comité d’Empresa (works council). The Bultaco importer  gave it to as a gift to the museum. there is a plate they're saying this and i visited it with him.
The other awards were presented to Oriol by the Spanish Federation. I ride the Scottish Six days in 1972 with Ignacio , Pere and  Ramon . This is my tankard for the special first class award I receive. This is a gold medal from the spanish federation and another from the ministry of sport 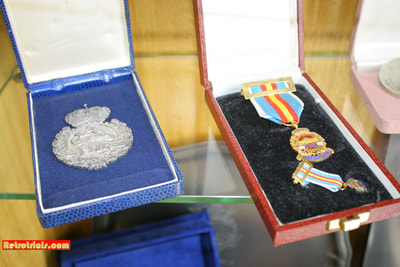 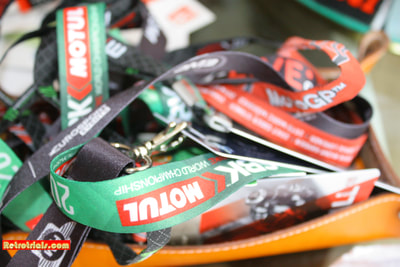 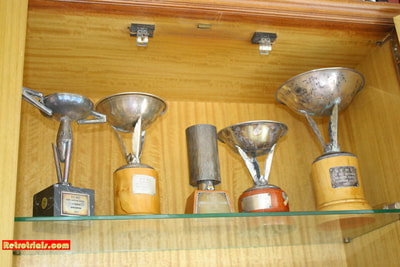 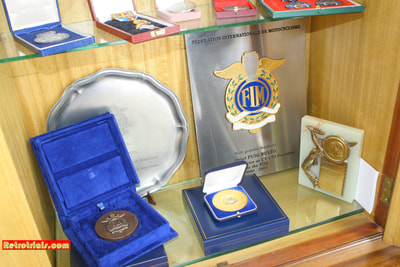 Today do you have any motorcycles ?.

No ....well in actual fact i have a moto Beta off road machine at my country house in Castellterçol .

Do you have any Bultaco's at all ?.

Well i have half Bultacos with my brother-in-law and i  started to restore one of the first batch of the the 250 4 speed with the round fins on the head.

Did you have any children ?

Yes i had 4 and i have seven grandchildren.

Did any of your children appear on the Bultaco advertising?.

No i don't think so.  The boys and girls in the advertising were my cousins. My mother was the second of 7 brothers and sisters and Paco Bulto what's the youngest.  And Paco Bulto married not very young, but 35 years old.  So with my cousins Ignacio and Juan.  Juan  now rides in Classic road racing and is the Spanish Champion. He is a specialist in classic motorcycles . Juan Bultó rides classic motorcycles in the Spanish championship. He is the road racing Champion.
In the 2nd photo - ​These awarded were presented to Oriol by  Franco for his services to sport 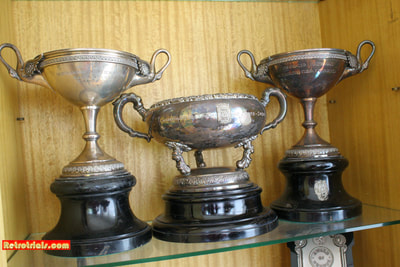 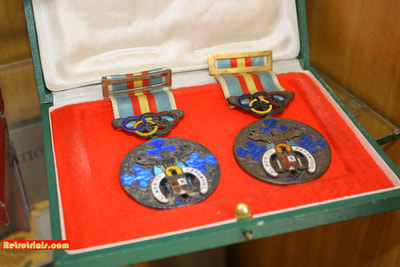 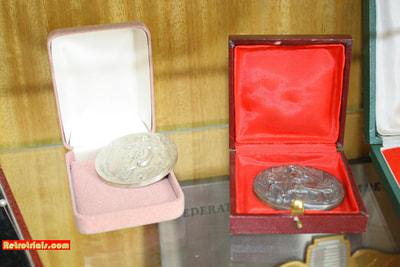 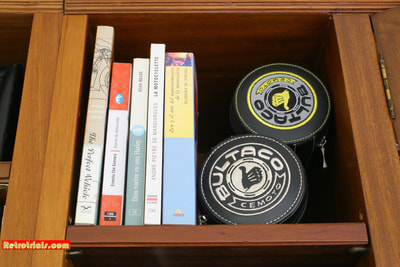 I remember when i was riding Ignacio was very young and Juan and Alvaro  came with children to watch me race.

What is your favourite memory of Bultaco ?.

Ahh there are so many.  Yes so many i have never answered this question hahaha. I think the answer is just being part of it is a fantastic thing just having worked with Paco Bulto is really a gift. He was a very fantastic leader. Even today, when i meet Vrjo Vesterinen, Malcolm Rathmell or the late Malcolm Lampkin  or Bernie Schreiber they say that the times of Bultaco were something  different, and something much better and they say that after my time with Bultaco i went to another place and it wasn't the same . Only the other day i was speaking with Charles Coutard  who went afterwards to SWM and he said that with Bultaco  it was something different and that it was a special pleasure having been there .

There was something contagious from Paco Bulto .
As you will know Barry Sheene rode for Bultaco and went to the family house of San Antonio on several occasions. Frank actually helped to gather the grape harvest there from the many Hectares of terraced vines. In 1978 Barry Sheene's life was celebrated in an episode of "This is your life".

You must watch this  NOW. There is a surprise :). Let me tell you Ignacio shares a number of his fathers mannerisms and sayings.
1st Photo - Oriol with Ignacio and
​2nd photo - I think this is Harry Lindsay in the hat. I think the man in the green hat was an Irish rider at a Grass-Track in Ireland.
3rd photo - Oriol and uncle Paco
4th Photo - 1970 ISDE - Espania - sharing a joke with Angel Nieto at the opening ceremony.
5th photo - Riding with family 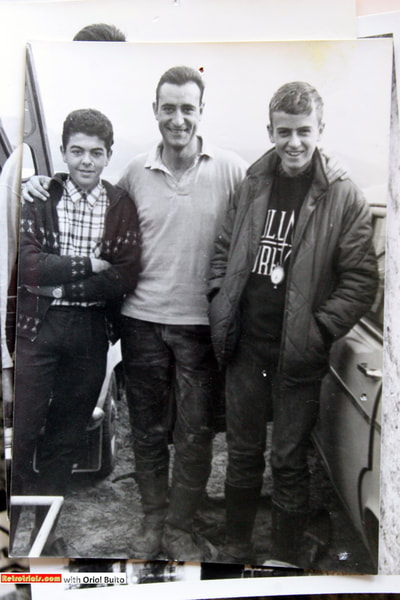 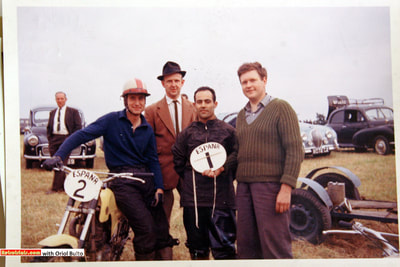 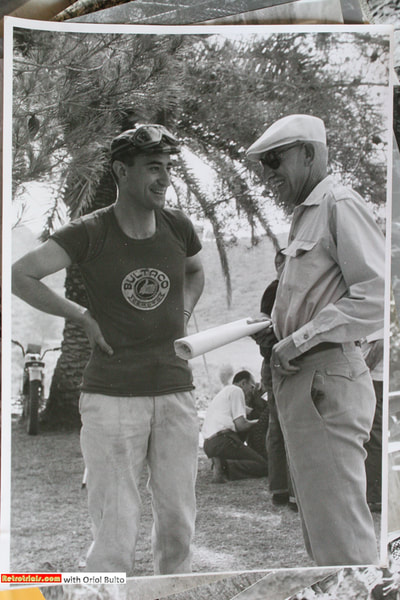 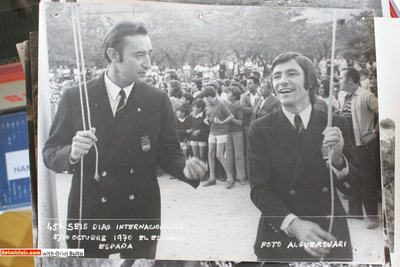 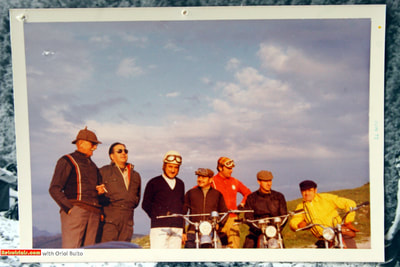 ​Paco  transmitted some kind of enthusiasm for what we did so it was a pleasure working with Bultaco and under the leadership of Paco Bulto. But of course i was working with my family relations so it was different for me, but people like Martin Lampkin and Bernie Schreiber say the same thing to me. Sammy is a little bit different, but he would admit this i think.

Can you imagine your life with no Bultaco ?

No ha ha ha ha it has shaped my life completely, but after Bultaco when we closed , in fact mister Chalamanch continued for a few months ,but i saw that was not a possibility of continuing  and I was trying to look for other things and another job.  I was about to sign for a company that worked with metal , a metalogic company from Bilbao to be the manager of the distribution in Catalonia ,then Mr Rabassa ,the head of Derbi  motorcycles , he knew that i was free and available and he calls me immediately and i i went there.
Mrs. Mercé Rabasa (wife of Mr. Andreu Rabasa, President of Derbi Motorcycles), and the Delegate of the Italian Motorcycle Federation at the Swedish Road Racing GP in the 70’s. 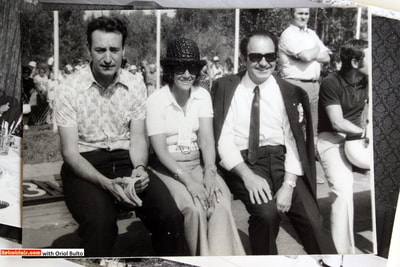 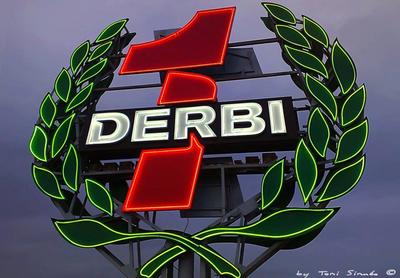