Which was Jordi’s favourite race and which one was yours ?

‘Ostia’ It is difficult to say. I don’t remember having favourite races.

Or places that you liked or where riding was good ?

Jordi liked the difficult races. Winners like complicated races and for me when you are there, you suffer more, but for a top rider it is easier to solve and re-address any mistakes. In these types of races you suffer more but you know that your star rider is better than the rest and that is good. You worry in a different way with easy races, you know that nothing bad will happen, but if you make a mistake you can’t recover. I prefer the difficult races over the easy ones and Jordi the same. It is not like you prefer Monaco or Nurburgring, the thought is: easy or difficult.

He found it more difficult to accept each step forward because for him they were such big footsteps but Marc found it much easier, if you ask Marc to step forward and if he could see it he would go with it straight away and then you ask him again and he would move forward again, they were different. This experience of not winning was bad for Jordi. Jordi saw this and said ‘could we talk’. Both Jordi and Marc were very hard working. 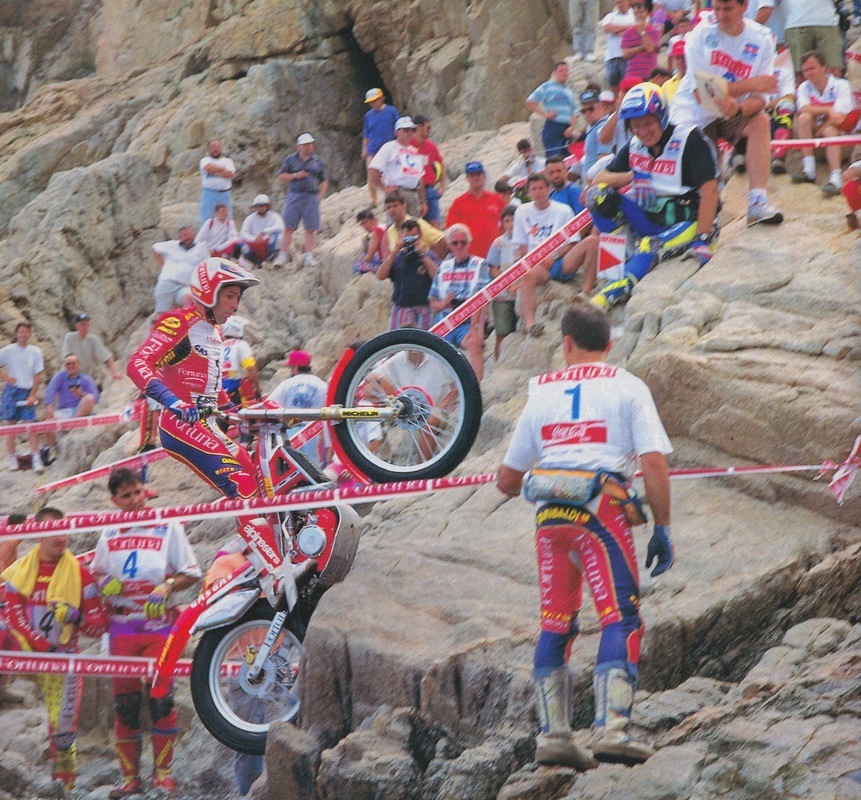 Exclusive interview with Salva Garcia - Minder to Tarres, Colomer and Bilbao www.retrotrials.com
Did you ever ride the SSDT ?

When you were minding what was the best time you had ? The happiest moment ?

I remember, a crucial time in my life, when in 1993, Jordi asked me to work for him.  Like everyone that does a job and seeks to do the maximum. My aspiration/maximum was to win a World Championship. I remember it as if it was today, the last zone in Finland - with another race to go. At that point we knew that if we cleared that section, we would become World Champions. I congratulated my colleague, I stepped aside and started to cry due to the high emotions.

What is your favourite time working in the trial ? Was this as a rider or as a minder ?

At the end, how did Jordi come to terms with not winning and did he accept this ?

No, he didn’t accept it. Someone so strict and that wins, finds it very difficult to accept it. It got to a point, that what he found difficult was to train. He was very saturated and it was very difficult for him to train. This was towards the last year.
Away from the sections Jordi was a glue salesmen and Marc played America football. Neither stuck at it , and returned to Trial ;).

Yes, mental. It is very hard for him to see that the end (of career) was in sight and that you can’t give anymore.  He had always been training to such strict regime, every single day, throughout his sporting career. He reached a point where he could no longer carry on. Nowadays, no rider, trains with such rigor or discipline, they organize themselves very differently. At the end, working under such self-imposed pressure was his demise.
Page 18