This first design for the GasGas chassis come from Italy . After we make here in Girona .

Ahhh no no no no, this is a Remoto place. In this place is Remoto. In this place I have the big machines to make the rubber injection for the fenders and also ariete. I was importer for ariete but also I make some pieces or them as well.

Ha ha ha. fingers in pies.
As the production of the first Halley started GasGas needed more space. They additionally rented a very very small garage at this exact location in Salt. This is where the chassis were fabbed and the assembly undertaken. The building has been demolished and flats built on the site.

Exclusive Interview with GasGas co Founder Josep Pibernat www.retrotrials.com
Where was the machine to make these pieces ?

Argh for the handlebar. I keep under in my house at another house before. I have a big rubber machine there. Very big. I have one garage for 8 cars there. The machine I have make the rubber into liquid and injection. I make 70,000 rubber components under name Ariete. It make component in 10 seconds and the machine it works 24 hours. Some times in 12 or 14 seconds it makes 4, 2 sets. I make bar grips for many motorcycles including Vespa. I sell a lot. I buy the machine I make the parts, I sell to Ariete and Ariete sell another place. I make this machines for Ariete Italy. They have much work and need more production so I give them this.﻿

Did Paxau ever offer you this bike for sale?
No …I don’t know this bike.

Josep Paxau has a trials shop in Torino, Spain. You do not just pass through Torino. It is in the hills and miles from a large main road. Paxau produced this monoshock Trials bike in 1985 with the aim of selling the prototype to a company. Merlin were offered this prototype but they didn't buy. I am told they couldnt agree on price. So the bike just sat here and pretty much hasn't moved since. It now sits in a long row of early aircooled monoshocks as well as Sherco prototypes.

Regarding the engine. Is my understanding correct?. The first GasGas engines were made by Villa and then when the company went bad you bought the moulds and then started production of the engine here?

Nearly, but we made new moulds here.

Was it similar to Villa?

No, but look similar.
Villa is the same crank as the Bultaco, the gearbox is like villa. The flywheel is from Spain, from Moto plat, a very nice company. After some pieces come from Spain, lots of suppliers come from Spain. Only small things come from Italy. Villa telephone me yesterday .He is a fantastic guy. He is a very good man. He is a big book, phew. He has done a lot. He is a very good man. He just speak me and he wants to win races still. Fransesc Villa is a little like Paco Bulto.

Do you know anyone who has an original Villa engined GasGas?

No. When Villa don't make the delivery and close I take the foundry, make the engine and the machinery. The engine is like the Bultaco inside. I know all of the suppliers, I know everything. When I work at Bultaco as a pilot I make work on the Bultaco myself. I make the gears in the engine myself. I change the gears and the crankshaft and make this all myself. Bultaco was a big factory at this time and makes 3000 bikes a month. When I arrive I go see an engineer and ask him I want to make this thing different and they say “Ci Ci, no problem”. I know the people, I know everybody. I make the tank, the frame. It's easy for me. I know all of the suppliers who make this special bike and parts for me.

From the time Villa closed, how long did it take you do design and produce the first engine for the GasGas?

Did you make the relations with the suppliers of the parts to make the motorcycles or was this done by someone else?

So you would fly to Czechoslovakia or Italy and say “I'm from GasGas, please can you make me this”?.

Yes, but sometimes it's the people I know in another village. I know when I start Hebo, after GasGas, I know Acerbis, Ariete, I know Polini and Surflex. I would go them and say hey I need a supplier to make some things and they would say Yes, I know this man or this place. 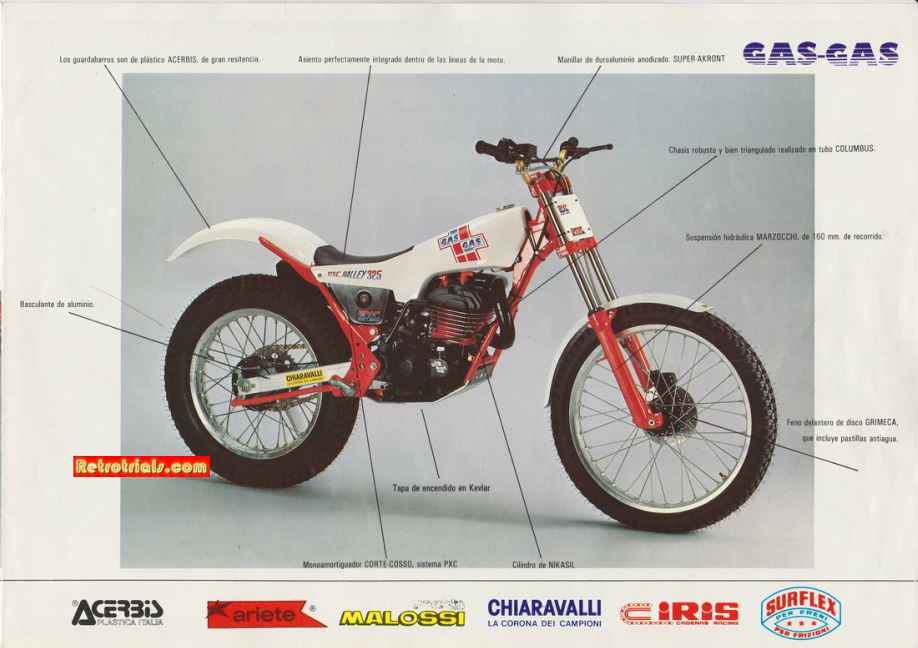 Exclusive Interview with GasGas co Founder Josep Pibernat www.retrotrials.com photo GasGas
﻿In Czechoslovakia the people want to be free so they work in Italy. They make the gearboxes and this. They go work in Czechoslovakia. They have good relations from Italy and go Czechoslovakia and the price is very good and the quality is good. Good quality and good people, good workers and good price. I go in China, you know the people from Mon chin. They are friends and after I arrive in Mon Shin I find another and another and another company.
﻿So very early then?

Was 1986 the first year of production for the Halley?

Oh, so the GasGas engine came in very early?.

Yes for this first Gasgas engine we only buy 20 - 30 engines from villa.

And that was it. All other engines were made by GasGas?