A detailed interview with Oriol Puig Bulto + full access to his photo gallery and Trial records.
With Juan Soler we discussed a trial,  that was up coming very near to Paris and that we should go there and learn about trials. At that time we had driven to a trial near Manresa ,but we were very short on time at that moment ,so we prepared with my 6 days machine with a shorter swinging arm. I recall that we did not change the angle of the front suspension, but I do remember that we modified the front suspension and the front axle.This motorcycle was the embryo of the Matador.
Juan Soler Bulto and Oriol share a photo at an event they are attending.
A selection of very early Trials photos on a range of developmental Bultaco's
First photo - Falling off at the San Antonio trial
​34rd 4th and 5th photo - Saint Cucufa. 1962 Bultaco trial prototype. This was the first prototype that we took to france for the trial when we meet the Coutards. This was before Sammy 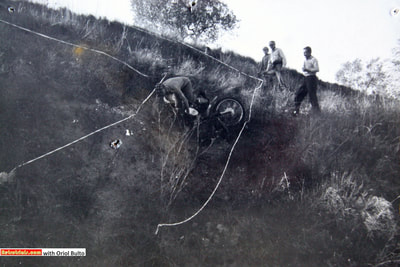 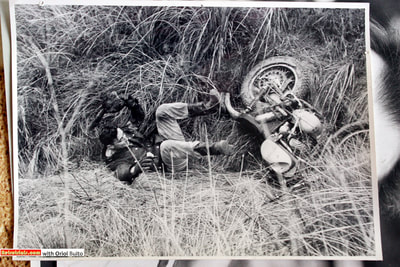 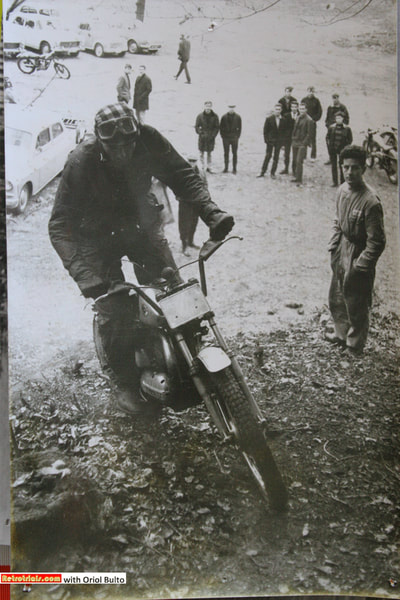 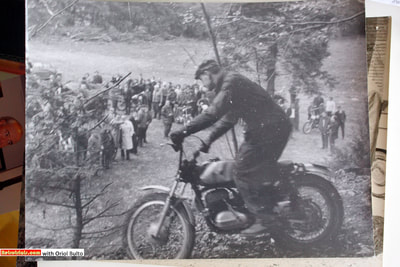 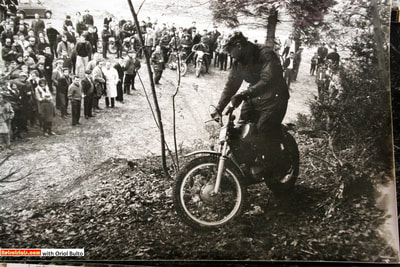 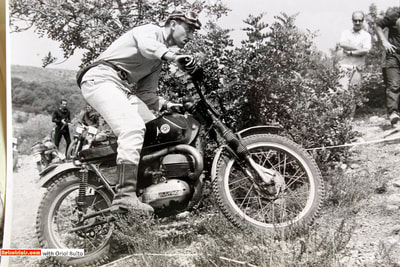 Juan Soler  prepared his Sherpa s with some modifications we had  different machines from one another. this was 1962 before Sammy Miller so we set off on the journey to France and to this trial and to the place Saint Cucufa. We met  the two Claudes. Claude coutard and claude peugeot  who were top French riders they were very interested in meeting to Spanish riders with two very different long machines and they asked to try and machines and they rolled them around for some time and came back and told us that we have good engines but you have to modify some things including the steering head angle. ​
Saint-Cucufa is a 201 hectare protected national forest located on the west of Paris. It remains today , almost exactly how it was when the Bulto's visited in the early 1960's.
So in actual fact ,the first direction we got towards making a Bultaco trials bike was from Claude Peugeot and Claude Coutard who is the father of Charles Coutard the French champion. It was from this position ,where we started to develop the Sherpa t. After this we go to Trials in 1962 and 1963 and 1964.
These photos of Charles Coutard's wedding are produced with his kind permission.

Oriol - "This is the wedding of Charles coutard. This is Claude Peugeot and this is me".
Around this time I went to the Scottish in my Seat 600 with my first wife who died from cancer some 20 years ago.  Marta is my second wife. S​o at that time we ran with the 600, and you can imagine with no motorways driving this was a huge distance to travel ,up through France  to Edinburgh in Scotland.  We started the trial in Edinburgh and I would be riding my bike from this time onwards, and my wife drove the car across Scotland to Fort William. I think this was in 1964 and at this time I had with me to prototypes of Sharpa T. One for me and one for Tom Ollerton.  Tom Ollerton was a rider from England who rode for Comerfords who were our importers there later.   The matador had already been modified heavily with the advice of the French riders and then our own modifications from our own experience.
Marta Prats Fábregas and her husband Oriol Puig Bulto.
Marta - When I married Oriol I barely knew that motorcycles had 2 wheels ha ha ha , but I learnt.
Marta - Besides Oriol these 2 things are the most important things in out home . This painting and this vase .This is a very special painting from an artist who specialised taking photos with strong light behind the subject. The picture is known as “The poet of the pictures against the light”. The artist has been in many shows and we do lend this out from time to time.
Page 16