Jordi first built the garages and museum on the olive orchard and made the grounds the way he like them. Then he make the house. When I start to work with Jordi, the garage was built but not the house. They then start building the house when I am working with Jordi. When I finished with Jordi still the house was not finished.
1993 and Jordi Tarres has commissioned a house build in an old olive grove. Eventually after years and years of construction work it was finished. 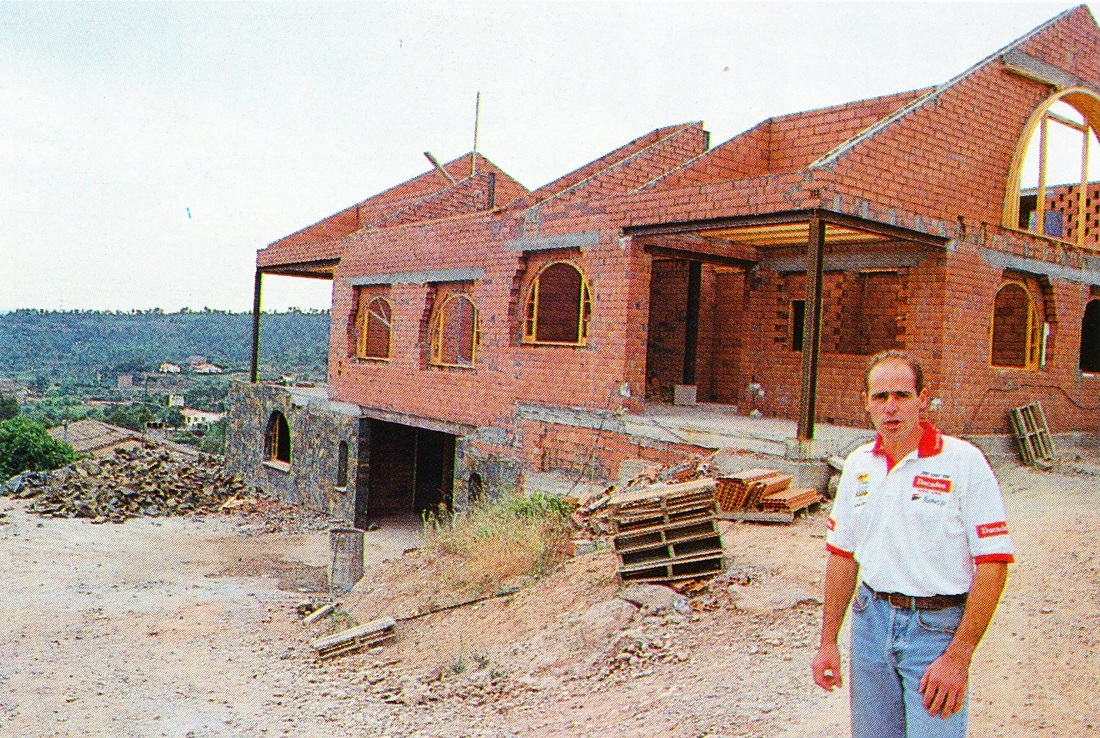 Exclusive interview with Salva Garcia - Minder to Tarres, Colomer and Bilbao www.retrotrials.com
Jordi’s parents had a house there and that person stayed three years laying stones and living there.
Jordi pulling a trick for the demanding photographers outside of his family house . By 1990 the entire family had helped build Francesc's house at the top of the hill leaving this house empty . Here Jordi's brother Fransesc in the striped shirt is sitting next to their dad Joanie , with Joanies best friend.
Although to modest to admit it Jordi did rise from humble beginnings. It was only being spotted cycle riding by Antonio Trueba that diverted him on a course away from manual labour and in his fathers footsteps truck driving. In this unpublished photo you can see a young Jordi being held by his father Joanie, with Francesc to his right in the forestry truck yard where Dad worked.

Exclusive interview with Salva Garcia - Minder to Tarres, Colomer and Bilbao www.retrotrials.com
Joanie kindly presented me with 2 bottles of his strong homebrew white wine. A little later on a remembered that I  wouldn't be allowed to take it back on the plane and so had to drink it all fairly quickly. Christ it was strong.
Francesc takes us on a 4 wheel drive expedition into the wilds surrounding Rellinars. The windows were down despite the lions and tigers and rhinoserous in the area. The 2nd photo shows Jordi's main training area and the place the Beta tape was filmed.
Why am I showing you some Spanish scrubland ?. Because this is the exact location of where Jordi Tarres watched and was inspired by Vrjo Vesterinan way way back in this famous Spanish section photo. I took me hours to find this location.
Some more of Jordi's practise grounds
Seeing the empty parking bay once occupied by the Beta Ducados bus brought a tear to me eye.
After a journey down the old tracks surrounding Rellinars we pass this rock face showing a cross section of life in Rellinars going back to the Jurassic period. Next to red hard baked mud were what I discovered to be old TR 32 Mudguards sticking out from the prehistoric mud.  Whilst we were away having fun it was good to see Pol still working hard.
The house takes 5 years to build ha ha ha. The builders were not from Rellinars. They were from Andorra. No, it was one person from Andorra, the person that layed the first stone.
The same view today 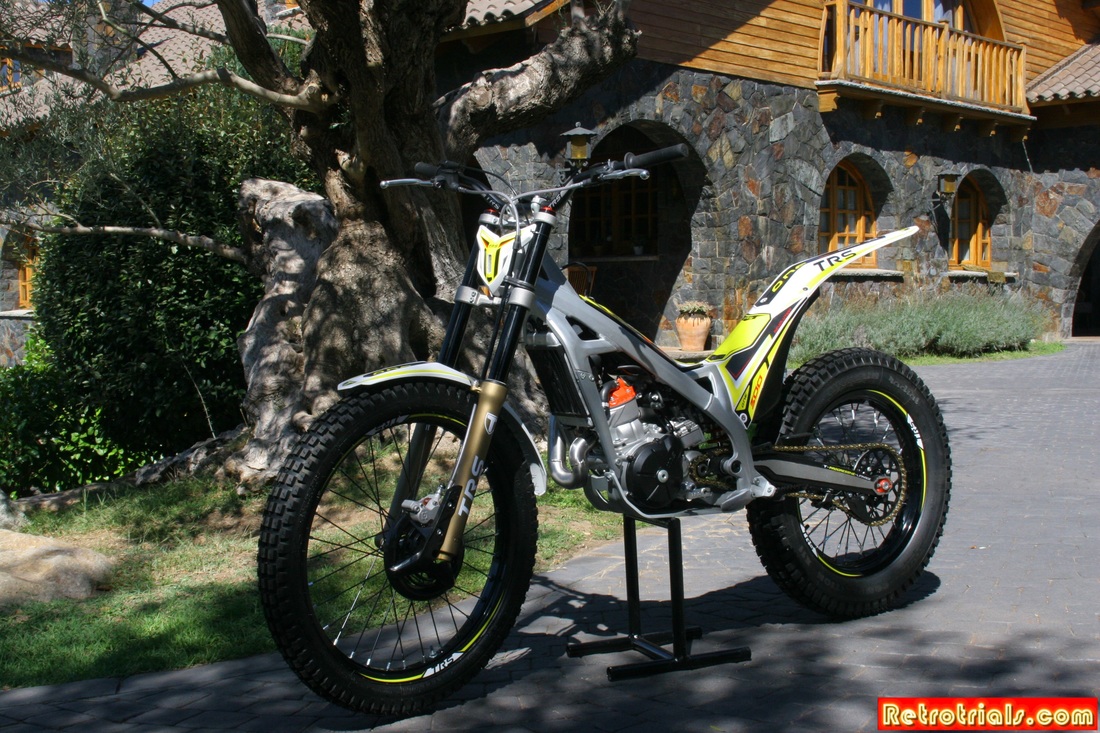 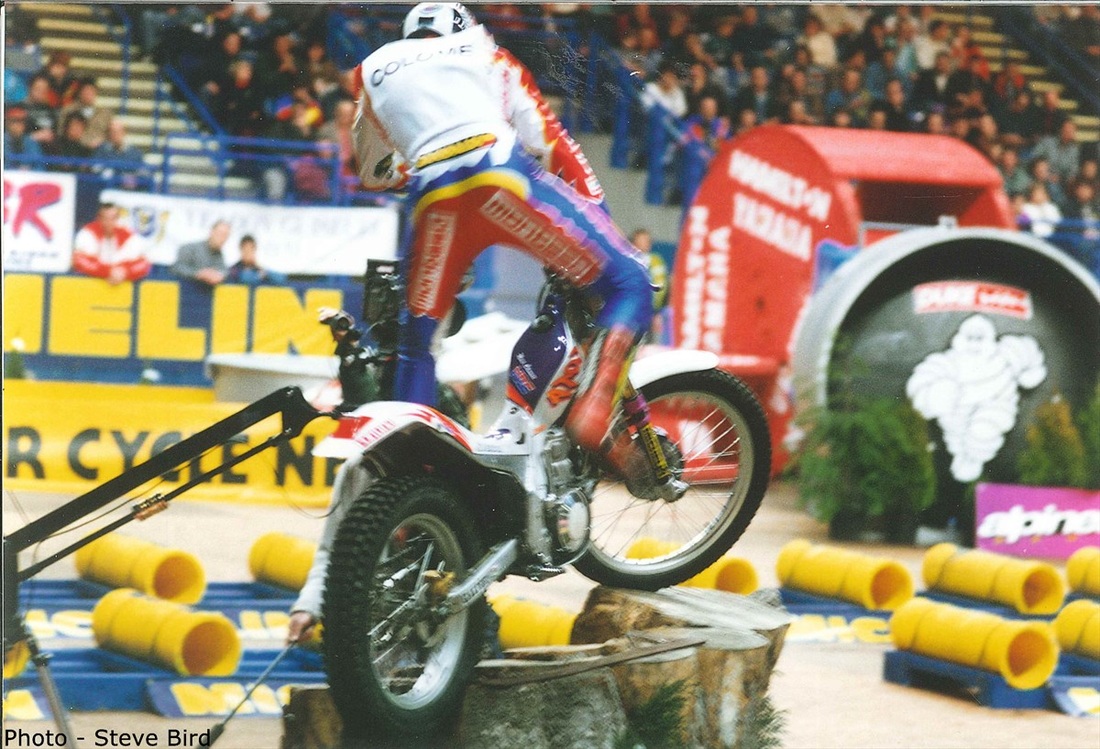 Exclusive interview with Salva Garcia - Minder to Tarres, Colomer and Bilbao www.retrotrials.com
Did you spend much time at the Fornells Gasgas factory ?

Yes, well Fornells was the one before this one, wasn’t it. Yes, yes! But I went to Fornells when I was with Marc, not with Jordi, I didn’t go at all with Jordi at Fornells.
Jordi Tarres' team was entirely seperate from GasGas

Exclusive interview with Salva Garcia - Minder to Tarres, Colomer and Bilbao www.retrotrials.com
With Jordi I went to ‘Torello a casa de Paxau’. The other day I thought, how could it be that I went with Marc and Jordi was there. It was the time. There was a year that I went with Marc and we’re in Jordi’s team.
Salva takes a look at Colomer's marks lost at the 1997 UK Hawkstone World Trial. 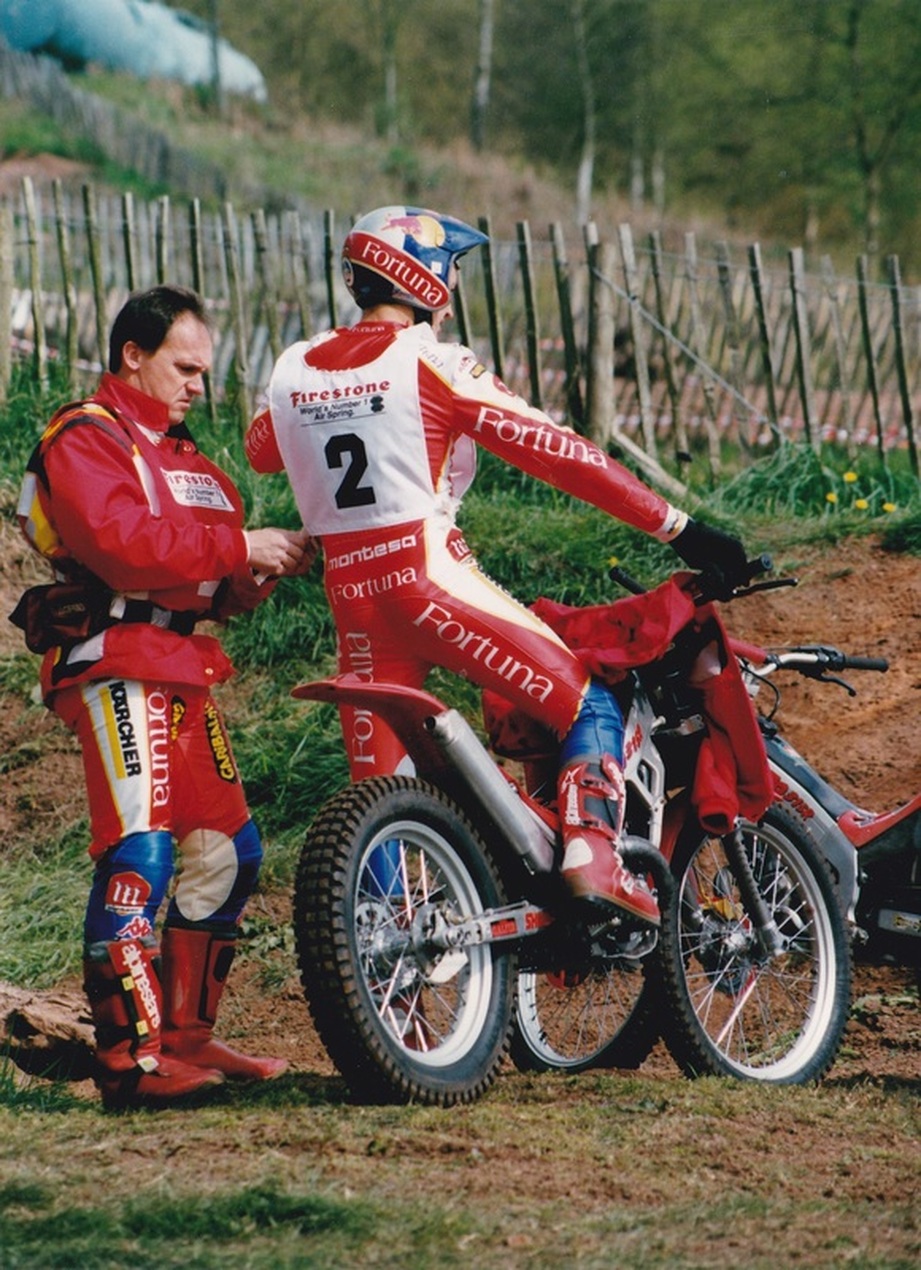 Exclusive interview with Salva Garcia - Minder to Tarres, Colomer and Bilbao www.retrotrials.com
What was the biggest problem that you had in your job as a minder ?

Always problems. At that time the minders didn’t wear a helmet. I fell backwards, I banged my head and Marc’s motorbike fell over me. They had to stitch me in the ambulance. From then on for all ‘motxilleros’ minders, was compulsory to wear a helmet. I remember one huge problem and bad time was when Marc Colomer crashed at the 1999 Czech Republic trial. I think 1999. I go there with Marc with the truck and I speak with Marc all of the time. For me this was a big problem because the hospital was no good.
Salva and Jordi Tarres talk with trial sponsors at the Sheffield Indoor trial. Marc Colomer waits for his time to ride with Tommi Ahvala , carrying an injury. Sid Lampkin watches the events with friends. 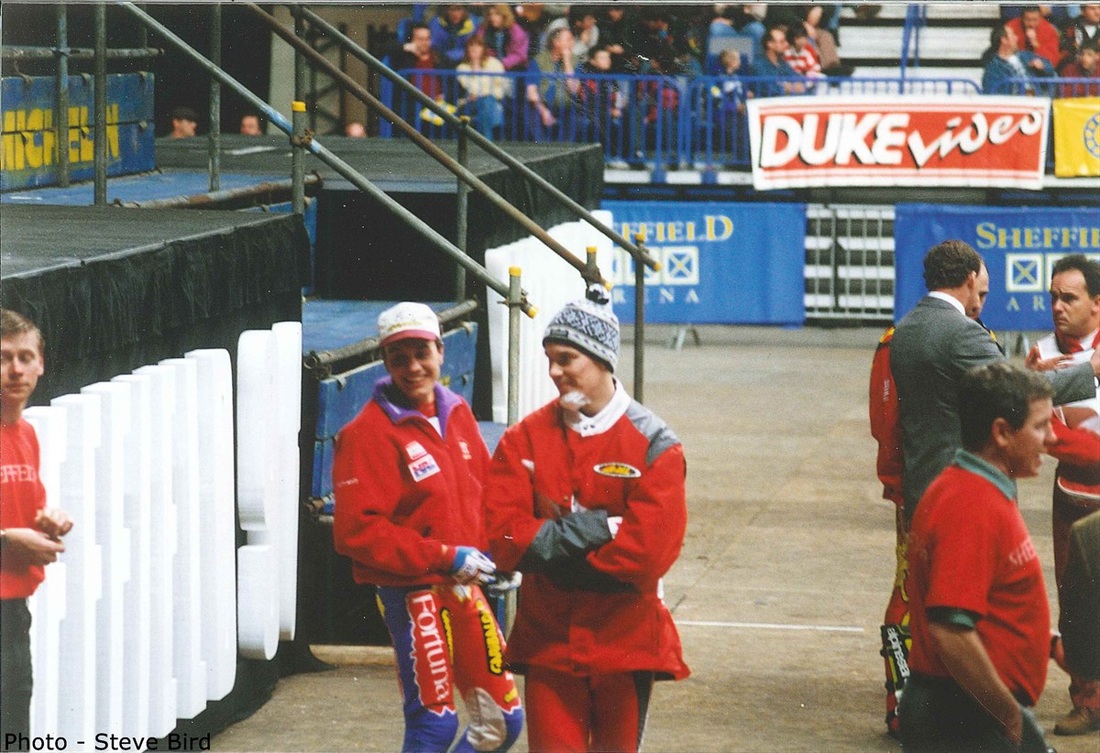