Retrotrials.com was priveledged to meet Jordi Permanyer . Mr Permanyer allowed us an interview and also showed us around his family's motorcycle collection which is now on display at the Museum de la Ciencia i de la de Catalunya in Terrassa. We were also lucky enough to be accompanied behind the scenes in the museum's private areas, and shown some of the Montesa exhibits not on display.

Pere's son Jordi Permanyer gives a unique perspective and recalls his earliest experiences with Montesa , working for Montesa as factory manager , right through to the talks with Honda , that he helped negotiate. He describes his father's character which , as you will discover is usually misinterpreted. Jordi also talks about family life , the challenges , his favourite role in Montesa , the company strategy , the success , the profits , the bikes and his fathers relationship with Paco Bulto , before and after Bultaco was formed.

The Permanyer collection also includes details of all Montesas that were sold before the company became Montesa- Honda. They have each record for each motorcycle identifiable through the chassis number. They also have a vast collection of thousands and thousands of photographs, catalogs, references and trophies.

​The interview also features photos provided to Retrotrials by Jordi Permanyer.
Retrotrial's opinion
I can't tell you how excited Josep and I were , in anticipation of getting this interview underway. Its not every day that you get to meet , and talk bikes with a member of the Permanyer family , whilst he shows you around his collection. To put it into perspective , i love history , but i am passionate about Spanish motorcycle even more !. Meeting Jordi Permanyer is equivalent to meeting the Spanish motorcycle industry's Royal family.

Over the years my love of Montesa has grown. Initially my journey into the World of Retrotrials followed the path of the more obscure marques somehow disregarding the larger companies as being corporate drones .But as time has passed i have been introduced to some wonderful characters from the larger firms and have visited some amazing places dripping with motorcycle history from these larger Spanish companies.

Like a slow cooker , over the years my former belief has been changed .I've learned from witnesses that passion is not exclusive to companies with a small turnover. Everyone struggled to make it big. Everyone followed a dream and whilst some lost , some ....a few , succeeded and became financially viable. Talking to these passionate men and women, hearing their stories, seeing their screwed up faces describing the competition , difficulties and determination and the success at the end of a hard fought year simply inspires me. The passion of Pere Pi is something i will never forget. He has Montesa oil forging through his veins and a Cota engine for a heart.  If you criticized Montesa to his face i swear his eyes would cut into you , then blast you with words,  winning your heart. This passion can soften the hardest ,most resolved and narrow minded man into believing .

Occasionally you feel as though you've left their company with part of them , branded on you .After hearing their story of having NOTHING,  leading onto what they achieved you feel that the World really is your oyster and that "I can do anything".

Reading it here is one thing , but hearing the voice of many of these die hard Motorcycle winners is incredible.
The point i am trying to make , is that Montesa had passion in bundles.
​
Passion for competition and passion for manufacturing.
As we walked , we talked and he introduced us to the museum 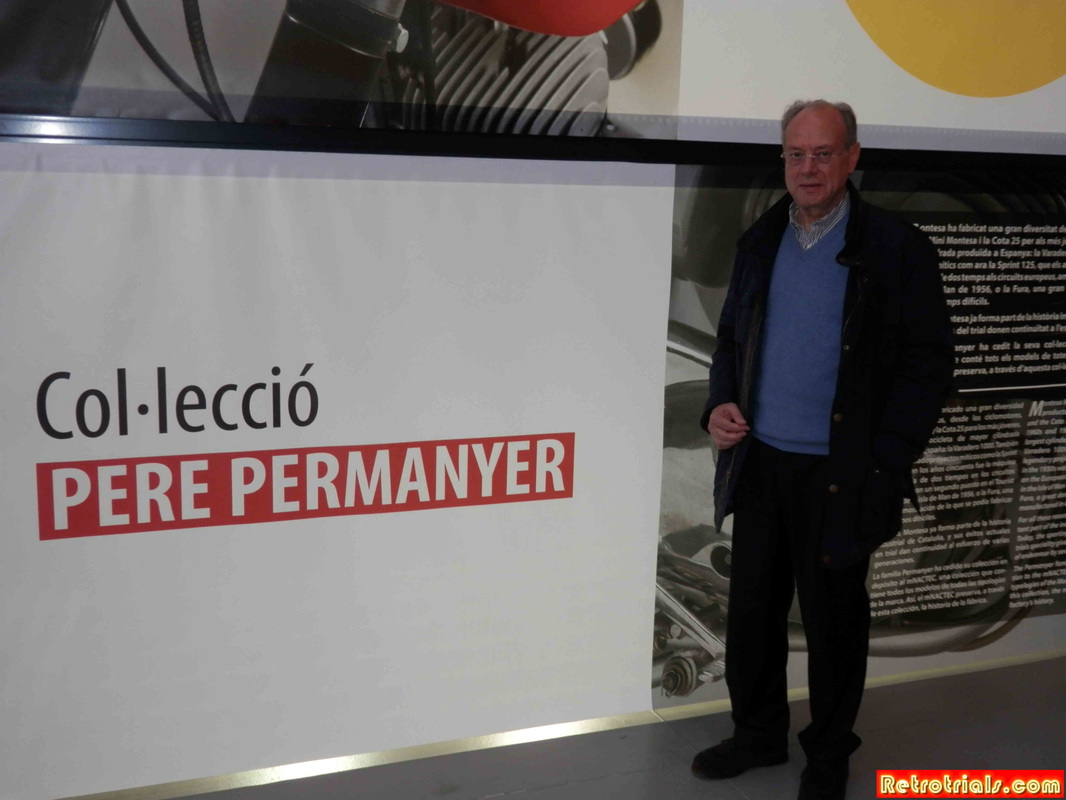 ﻿An exclusive interview with Montesa's Jordi Permanyer www.retrotrials.com
This place was an old woollen textile factory from the beginning of the 19th century. At this time the textile industry was very big and popular.There was a large textile industry in this area and they exported a lot of  products to Europe and further afield. This factory was called “The Vapor”, because of the steam engines that provided the power. It completed the entire process and produced finished garments from raw materials.
The construction is very very nice with some beautiful features. The factory changed its purpose in 1990 and became the Museum de la Ciencia i de la de Catalunya.
This is science and technology museum and is a great Centre and Hub for the education of people within the area. Many school children visit each day and learn from the many permanent and temporary exhibitions on display here.
​Page 2