After Saturday day at the show we went back to the hotel to freshen up and then went off to dinner.

1982 500cc Motocross World Champion was one of the guest speakers. He was great to listen to but only spoke for 10 minutes. I could have listened to him for hours. He seemed great fun.

I sat next to some very very knowledgeable motocross guys who didn't just ride, they knew everything about the sport as well. They were also free speakers which made it really interesting.

The photo above was taken using the panorama mode on my camera. It's ok, but had missed a lot of people out. It gives a flavour, that's all.

Page 17 2014 Telford Classic motorcycle show report
The next day at about 2pm, I wondered out to the Auto jumble. As usual a lot of it was rusting junk (worth restoring to someone) and the occasional interesting bike and accessories. You can always find good stuff out here as well, especially if you get here early ...which I wasn't ha ha. You could do a deal with these traders which I enjoyed :) Everyone loves a bargain. 2 cans of quality chain lube and a litre of synthetic 2 stroke oil for £20. That's bargain enough for me :)

Page 17 2014 Telford Classic motorcycle show report
A nice example. Original and complete. It's just a pity about the rear mudguard being cracked.
﻿A good selection of Suzuki PE's and old style Yamaha DT's ﻿ 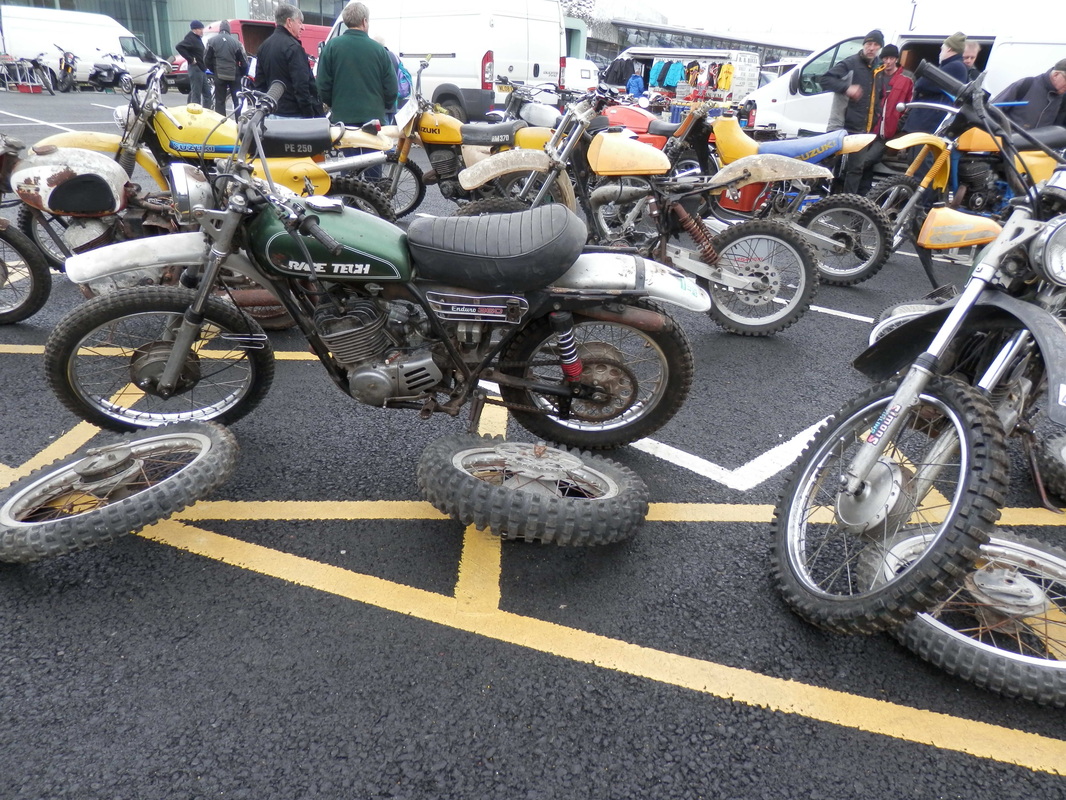 Page 17 2014 Telford Classic motorcycle show report
Brad Lackey was on stage talking about his days at the top. He was a very interesting and amusing guy to listen to. He was one of those guys who had so so so many stories. He was a really buoyant and upbeat speaker.
Dougie Lampkin visited the Retrotrials.com stand and met Jason Finn who was already there. Dougie was carrying his white polythene bag and was shopping for some bits. He was particularly interested in the Beta's and him and Jason enjoyed some banter about Jason's modification to his stunning 94 Techno.
Nice photo. Jason Finn and Dougie Lampkin. 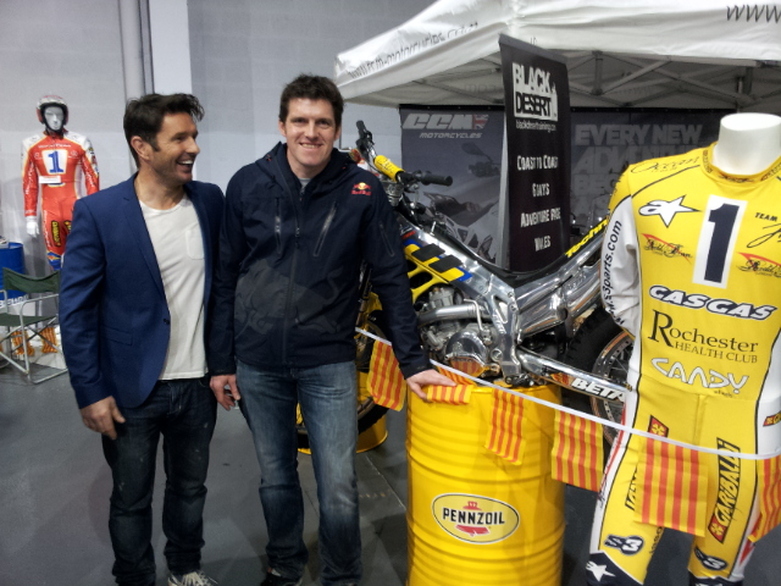 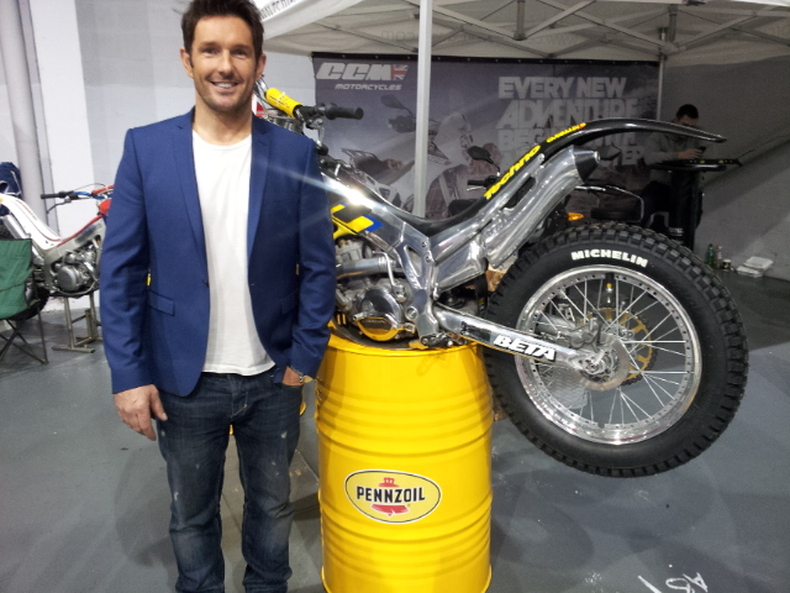 Dougie was a really entertaining and open guy. I've never met him before, but he certainly looks as though he's lost a lot of weight which I guess might be down to the cycling he's been doing. He said that he is starting to train at the moment to get ready for the Scottish and just takes himself off on his own practising. He said ...the more people that go the more chatting, so he goes alone to get some good practising in. He also mentioned that he'd ridden Toni Bou's Honda 2 months ago. He took it for a quick spin and brought it back saying "It's the same as mine was". Toni laughed and replied "It was yours ha ha ". 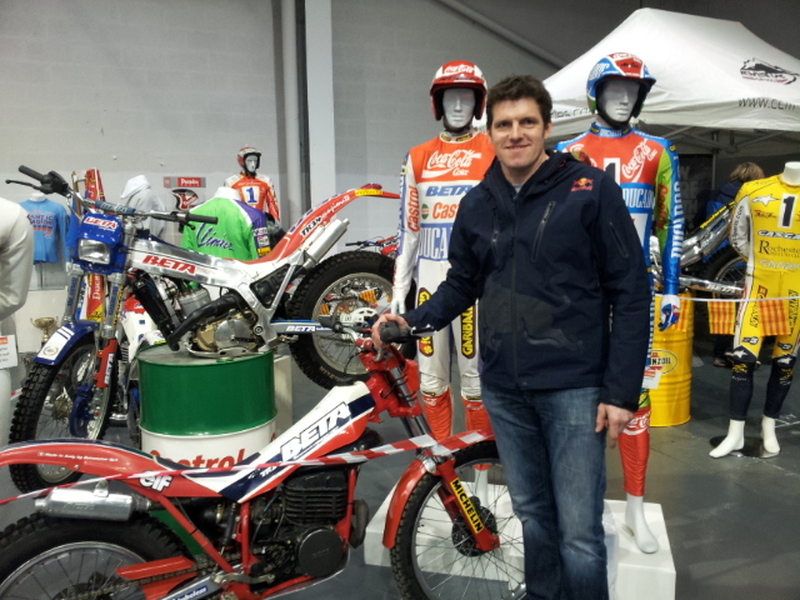 Page 17 2014 Telford Classic motorcycle show report
The weekend was so much work I can't tell you, but it was great to put it on display so that others can enjoy it all. That's the name of the game. It was nice to meet loads of people I've only exchanged 1's and 0's with over the internet.

After 2 hours of packing up we hit the road for the South of England and finally arrived for bed at 1.30am after dropping the hire truck off. I've now placed the mannequins hanging upside down from the garage ceiling. I've placed all of the clothing in an expensive antique hardwood family heirloom wardrobe. I then locked the door of the wardrobe and walked into the garden blind folded. I then threw the key somewhere in the bushes. One day, a long time from now it will take some serious effort to find that key so that I can open the wardrobe without damaging it. That's the aim anyway :)

Thank you to Jason Finn, the mystery man from the north, Jordi and Francesc Tarres,Tommi Ahvala, Amos Bilbao, Eddy and Dominique Lejeune, Lluis Gallach, Joan Ruiz, Jordi Rabassa, Ramon Mira and Mick Andrews for all of their help and contributions so that this could happen.

Most of all thanks to my wife Anne for going along with it and working as hard as her nutter husband on it :)