This website was initially created and started to honour and celebrate the unusual Catalan trials marques of the 80's and early 90's. This was the goal. These motorcycles and the connected people are the foundation for this website.  There are 6 motorcycle marques of primary interest.

There is a plethora of information, interviews, photos, factory visits, retro gear surrounding these and other marques uploaded onto this website. However one marque has remained untouched, unspoken and unmentioned. This is the marque of "JP" and this is where that changes.

The JP Trial motorcycle was a striking and unusual Catalan trials bike and also very very rare with a small production run. These two qualities alone place the JP in the very desirable section as far as I am concerned. Its 3 spoke aluminium and magnesium cast Nagesti wheels put the JP in the same bracket of strange trial motos as Merlin and Mecatecno. JP are just so rare, its almost impossible to see one outside of the display at the Barcelona Motorcycle museum. 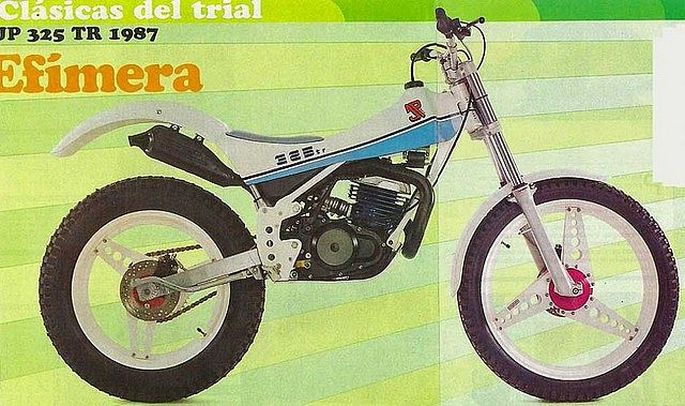 2014 Francisco Paya and the 1987 JP 325 Trial Interview www.retrotrials.com
In March 2014 Retrotrials was lucky enough to have an appointment to meet Fransisco Paya, the co founder of the JP trial motorcycle at his motorcycle dealership, Paya motorcycles in Mataro, Barcelona. I wanted to find out where the inspiration for this bike came from, how many were made, what years were they made in, what changes were there from year to year, why were there 3 spoke wheels on some and not others. I had a lot of questions but there was one problem.............. 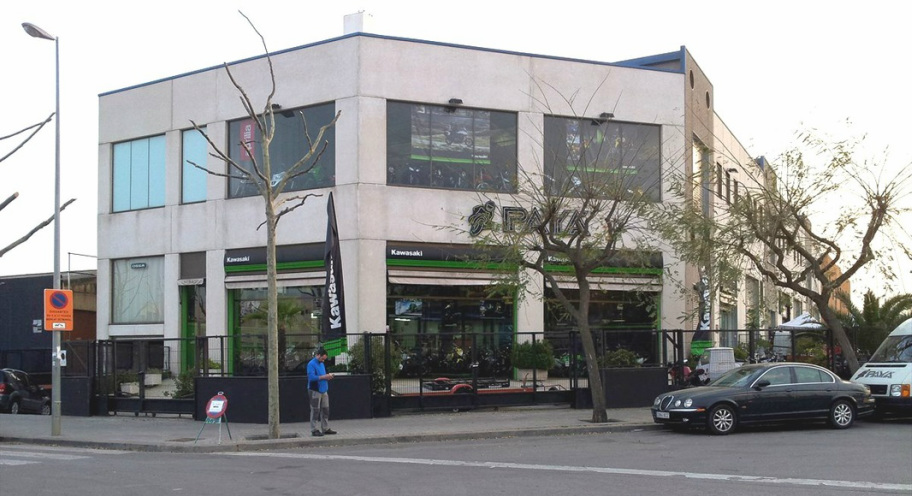 2014 Francisco Paya and the 1987 JP 325 Trial Interview www.retrotrials.com
A link to the report about Vasan SA the metal fabricators to the motorcycle manufacturers will be placed at the end of this report
﻿I met Santos as arranged outside of Paya motorcycles in Mataro. Mataro is a large suberb of Barcelona. The huge estates of sprawling flats on the right as you enter Mataro are far removed from the Barcelona you normally see. Never the less, Mataro and I ended up in a large business area.

Santos was there as planned and it was good to meet him face to face as we had emailed each other many times. Without any delay we entered Paya motorcycles. This might not be a big deal for you...but for me this was. I had been down street view on Google peering through the windows of Paya motorcycles countless times, just imagining if inside there might be a little bit of Retro.

2014 Francisco Paya and the 1987 JP 325 Trial Interview www.retrotrials.com
Francisco is a careful business man and of course I'm this strange guy from England coming over to ask him about his JP bike, so initially he was a little careful as we got to know each other.  It didn't last long and Francisco and Xavi were extremely friendly showing us all around the premises. Francisco was preparing well. They had a mechanic polishing the JP 325 and offering to place it here, or there for the best photos. It really was second to none :)

We shall start at the beginning. Paya motorcycles didn't start as this huge Kawasaki main dealer. It had humble beginnings around the corner. Francisco offered, so we jumped in Santos's car and headed round to see the initial workshop, where the JP was made.

Snr Francisco Paya along with famous Ossa Trial rider and Alfer trial designer Mr Albert Juventy were the creators, designers and founders of the legendary but little known JP trials bike. These two lovers of trial met initially as they were both Ossa riders. Francisco admits that the passion for the creation of JP was incredible and that the business sense was not quite as advanced. It was here in these ground floor workshops that Juventy and Paya designed and manufactured the first prototypes and subsequent production bikes.
Once Factory Ossa rider Albert Juvanty had retired from competition he played the part in designing a number of different trials bikes. Here he is seen working on the prototype Alfer TX301 water cooled trial model. Unfortunately this machines never made it into production and this was the only unit produced.
Its here on Ronda President Macia in Mataro, that the JP motorcycle was born. 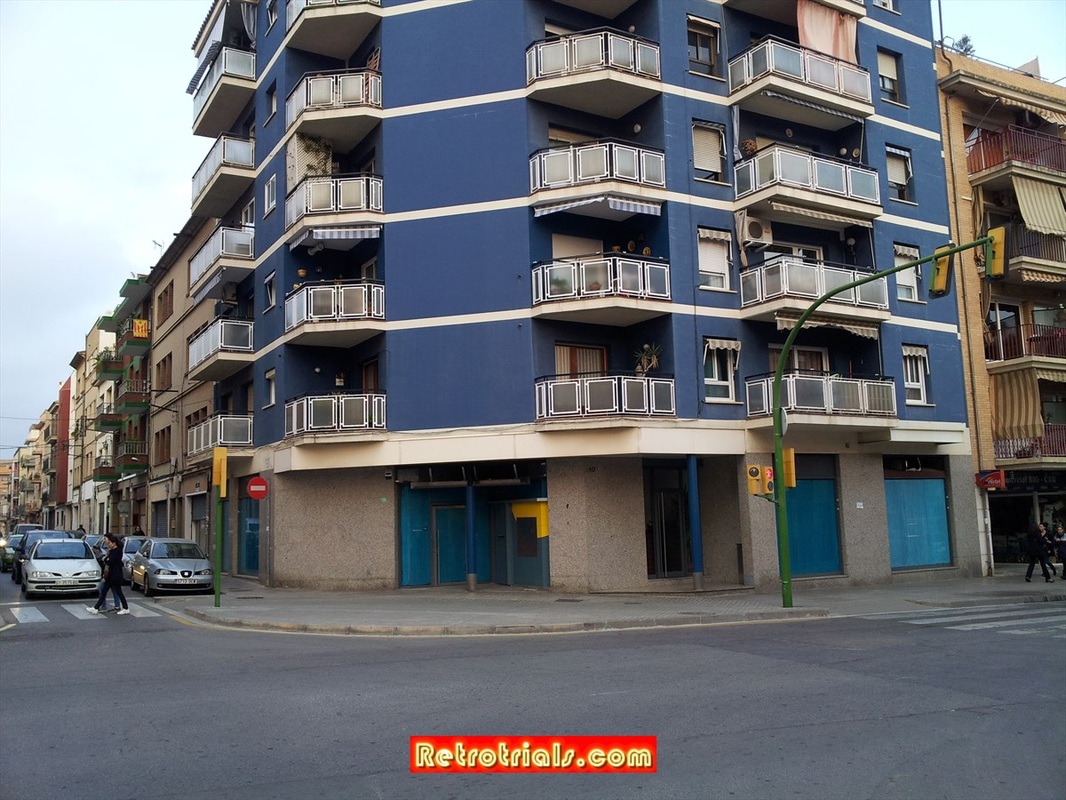 2014 Francisco Paya and the 1987 JP 325 Trial Interview www.retrotrials.com
These premises were not sought solely for this project. Mr Paya had been a motorcycle mechanic and dealer for all of his life. It was only aged 33 when he saw the potential and had the desire to embark on the JP project.
It was much much later on that Fransesc Paya was able to afford the jump to these premises. Before we take a look at the JP and hear about its history, lets have a look around. This isn't just an ordinary dealership and we have the boss with us, so we have access to all areas :)

In the photo beneath, have you noticed the special collection of trials bikes in the glass box? We'll come to that shortly. 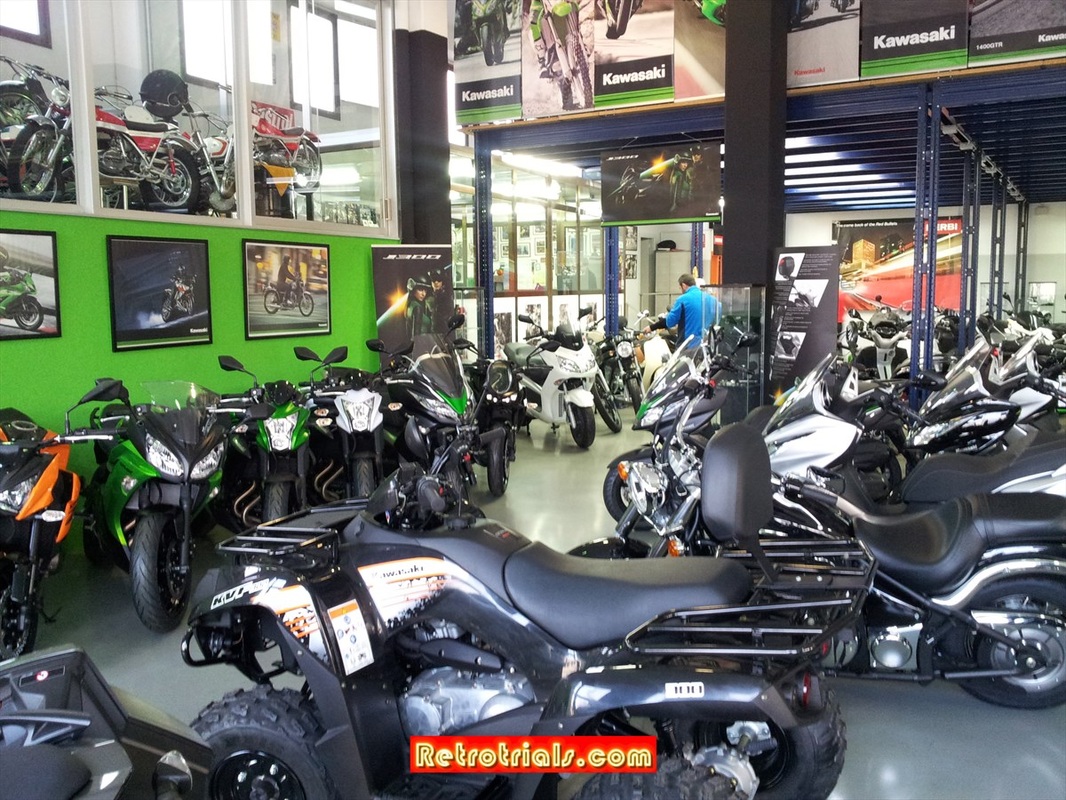 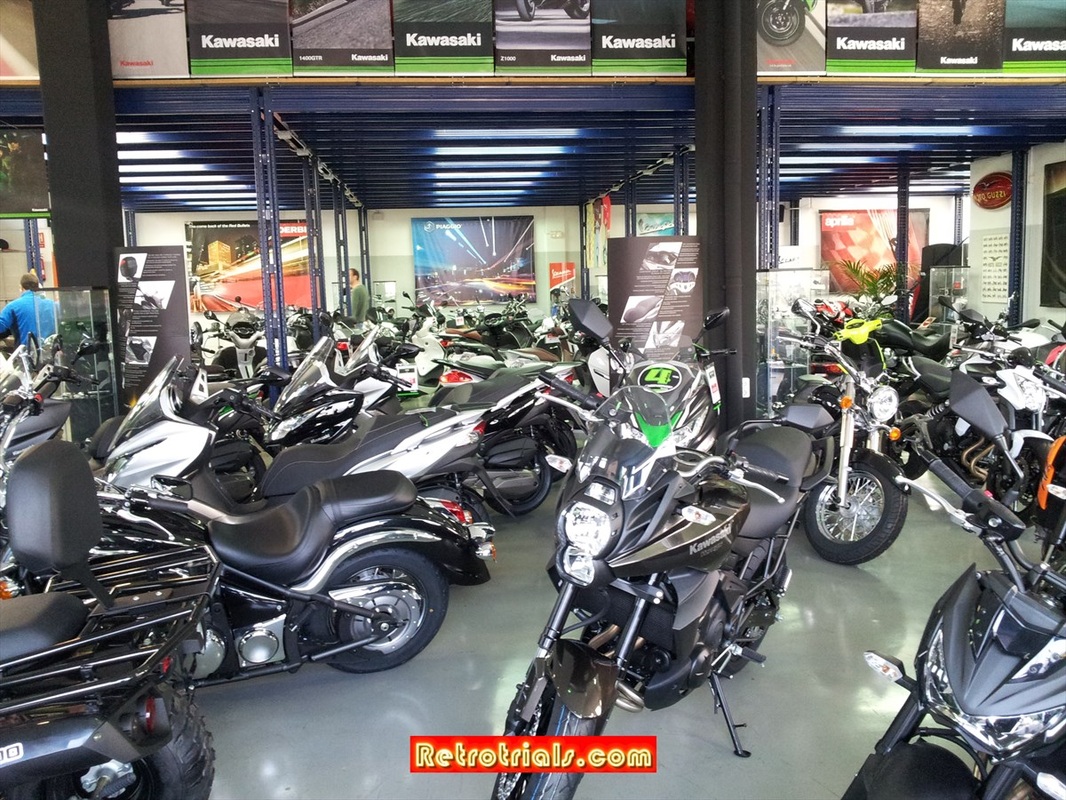 2014 Francisco Paya and the 1987 JP 325 Trial Interview www.retrotrials.com
I love so many of these new bikes. One in particular that stood out was this big engined scooter. My only worry is that, as you are so low down you don't appear as well as if your riding a big trailie.